California Acupuncture Board: a Mockery of Consumer Protection

Many of the specific issues that the Governor and the Legislature asked the Commission to review have festered because the [California] Acupuncture Board has often acted as a venue for promoting the profession rather than regulating the profession.

On March 12, 2012, during a brief Sunset Review hearing, the California Senate Committee on Business, Professions and Economic Development asked the California Acupuncture Board (the Board) to respond to a set of harsh criticisms.

It is not the first time that the dysfunctional Board — which falls under the Department of Consumer Affairs — is being scrutinized by the legislator. The Board has a long history of operating in an inefficient manner, misreading its governing statutes, and potentially endangering the public by refusing to promulgate regulations concerning the sterilization of acupuncture needles or the wear of medical gloves by practitioners.

In the past, members and affiliates have even been investigated for taking bribes and selling licensing exam answers. The Board was replaced several times in order to clean up the quasi-anarchic and corrupt practice of acupuncture and Oriental medicine in California.

This time, the Senate Committee listed 10 major issues in a Background Paper, which is a worthwhile read for those interested in the regulation of acupuncture. The Senate expressed serious concerns about many administrative, educational, licensing, enforcement, consumer protection and budgetary matters. In response, the Board Chair and Executive Director offered little explanation. The Board now must respond to the Background Paper in specifics.

Trouble at the state acupuncture regulating authority goes back to 1982. The longtime chairman of the former acupuncture regulating agency (the Acupuncture Committee), Chae Woo Lew, was selling the answers to the California Acupuncture Licensing Examination for $10,000 to $20,000. He made $500,000 to $800,000 from an estimated 80 test takers. He was caught in 1988, but only a few dozen individuals who bought answers from him were ever caught. Lew was sentenced in 1990 to five years in prison.

In 1999 Acupuncture Committee became the Acupuncture Board. The Board was sunrisen until June of 2002.

During the 2002 sunset review of the Board, an independent state oversight agency called the Little Hoover Commission (LHC) was charged to assess longstanding and contentious issues regarding the State’s regulation of acupuncture — including a review of the scope of practice and educational requirements for acupuncturists, the process for accrediting acupuncture schools and for examining licensees.

LHC provided its assessment to the Legislature in September 2004 in a report called Regulation of Acupuncture: A Complementary Therapy Framework, (Report #175). LHC blamed the Board for many of the problems the profession faced. The report stated that the Board had “too frequently acted as a venue for promoting rather than regulating the profession.” It added that as a result, the Board had “missed opportunities to protect the public by providing accurate and complete information about the therapies that licensees can provide.” The report also stated that the Board had not “adequately incorporated emerging scientific evidence into board policies, regulations and public communications.”

The following Board review in 2005 found little improvements. Among the main concerns was the fact that the Board had misread its governing statutes concerning the scope of practice of acupuncturists. It also pointed out that the Board had potentially endangered the public by refusing to promulgate regulations concerning the sterilization of needles or even to discuss this issue as an agenda item in any public meeting.

During the most recent Board review, the Senate committee pointed out that most of the current issues are the same as those the former sunset review committees had struggled with. The persistence of these issues appears to indicate a general lack of accountability and follow-through on the part of the Board, making one wonder if there is a real willingness to take direction from the Legislature and to implement its recommendations.

The March 12, 2012, hearing ended with the Senate Committee letting the Board’s Chair and Executive Director know that it was very concerned about how the Board operates.

One of the persisting issue is the Board’s insufficient oversight of continuing education units (CEUs) . The Board has consistently approved material that is “grossly out of compliance” with it own regulations. The Senate Committee gave examples of courses in numerology, vitalism, astrology, “the Capacity and Function of Love,” cosmology, magic, sound healing with tuning forks; Reiki and “Four Energy Healing Theories,” whatever that means. 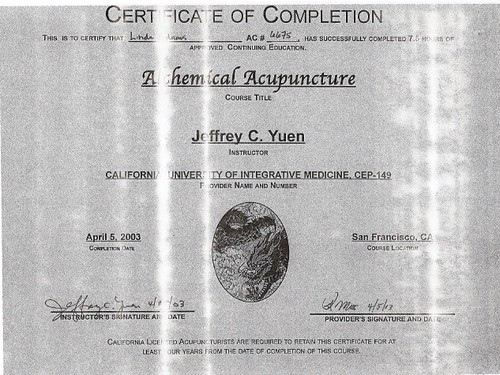 A 2003 CEU certificate in “Alchemical Acupuncture” taught by Jeffrey C. Yuen. A workshop in such outrageous nonsense is sufficient to renew an active acupuncture license in California.

The Board has indeed a long history of approving CEUs in hocus pocus. Examples are courses in mysticism, Taoism, alchemy, astrology, iridology, magic, geomancy (I-Ching), numerology, etc. The latest list is available here. What is most disturbing is the Board’s continuing denial that there is something wrong with approving a course in subjects such as astrology… 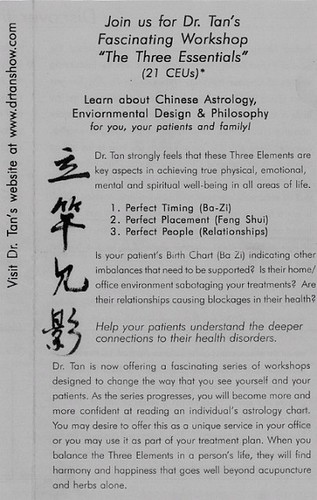 This flyer states in a different section that “This workshop is approved for 21 CEUs in Category 1 by the California State Board.” 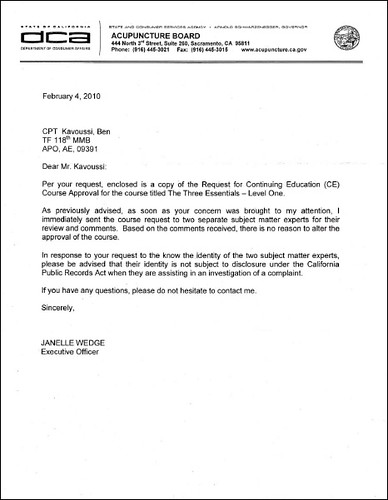 After a complaint letter to the Board, its Executive Officer, Janelle Wedge, writes to me that: “Based on the comments received, there is no reason to alter the approval of the course.” Wedge resigned right after the Senate hearing.

Another Senate criticism was the disciplinary case management time-frame. The Board, which is responsible for regulating the practice of approximately 10,000 acupuncturists, takes at least 2½ years to investigate and take action. Since 2008, there has been an average of 223 enforcement cases per year; the majority involve unprofessional conduct, ethical issues, practice management issues and sexual misconduct. A list of disciplinary actions is available at the Board Actions webpage. The Board has received an average of 145 direct complaints complaints per year since 2008. It has also received 78 arrest/conviction reports from law enforcement since 2008.

And arrest and conviction there is — even for major crimes, such as trafficking in persons and sexual slavery. The media reports that since 2006, 17 people from 10 massage and acupuncture parlors in Redondo Beach, CA, have been arrested for alleged acts of prostitution (The Daily Breeze, Dec 8, 2010). In June 2009, 22 women – most of them Chinese nationals – were arrested in Vista, CA, in connection with 9 day spas and acupuncture clinics (FOX 5 San Diego, June 4, 2009). Prior to that, in March 2007, in one of the largest prostitution investigations ever in Orange County, CA, five individuals were arrested in business that advertised acupuncture and massage but sex was the only service provided.

Crime at acupuncture and massage parlors is such a concern that some local governments in Southern California have taken their own preventative measures by withholding business licensing. For example, the neighboring cities of Redondo Beach and Torrance have recently passed Urgency Ordinances that impose a moratorium on the issuance of any new permit, license, approval or entitlement pertaining to new massage/bodywork and acupuncture businesses, services and practitioners.

The picture that emerges here based on the Senate review and reports in the media, is that acupuncture in California is a poorly-regulated and corrupt profession with an ill-defined scope of practice. Many practitioners are deluded purveyors of New Age mumbo-jumbo, and a few are criminals involved in human trafficking and prostitution. The dysfunctional Acupuncture Board not only does not protect the public from quacks and criminals, but quite to the contrary, has a long legacy of acting in their favor. None of this serves the best interest of the public.

By looking at this picture, the world “Kafkaesque” comes to my mind. It is the only term that can accurately describe the senseless, disorienting and often menacing complexity of acupuncture regulation in California. The Board’s failure to follow a clear course of action, its unwillingness to implement its mission, the incomprehensible delays in disciplinary actions, and the bizarre and illogical rationale for some of its decisions, all point to the cynical dereliction of public safety by a group of defiant insiders.