NextDummy Medicines, Dummy Doctors, and a Dummy Degree, Part 1: a Curious Editorial Choice for the New England Journal of Medicine
Science and Medicine

Asthma, placebo, and how not to kill your patients

A number of years ago I was walking along Lake Michigan with a friend (a fellow medical resident) when she turned to me and said, “are you wheezing?  Do you have asthma?”  I had always been physically active and assumed my breathlessness while walking down the trail was due to the thirty extra pounds of pizza and doughnuts I’d acquired during residency.  But she was right: I was wheezing and breathless and it didn’t feel good at all.  I made an appointment with one of the hospital’s lung docs who took a good history, did a physical, and ran some pulmonary function tests.  And I did have asthma.  And it felt much, much better when I used proper medication, a feeling confirmed by my improving lung function tests. (Not too surprisingly, the asthma got even better when I lost 40 lbs and started treatment for my acid reflux.)

I still get mild asthma symptoms from time to time, especially when I get sick, but for many others, the picture isn’t so pretty.  Asthma kills at least a quarter of a million people every year around the world.   If you’ve ever worked in an ER and seen a kid with a bad asthma attack, you’ve earned a healthy respect for the disease.  If you’ve ever watched your own kid gasping for breath, begging you to make it better, you’ve learned to fear it.

As our understanding of asthma has improved, so has our ability to treat it (an ability that is strongly linked to a patient’s socio-economic status.  Mortality has been rising despite the discovery of better treatments.  Wait: let’s pull this out of the parentheses…)…  Asthma deaths and hospitalizations are largely preventable, and disproportionately affect Black and Hispanic Americans. We know how to treat the disease asthma, but don’t know how to treat the people who are affected most. 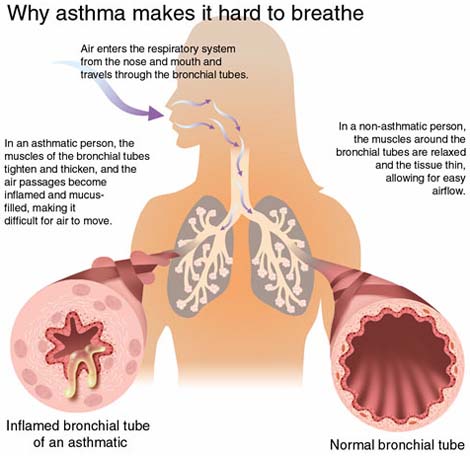 We understand that asthma is not just a tightening of the airways but also an inflammation that can cause long-term damage.   Not only can we treat asthma, but we have objective ways of measuring how well our patients are doing.   It’s easy and inexpensive to measure airway obstruction and response to medications.  We know what works.
For this reason, a new study in the New England Journal of Medicine seems both wise and foolish.

(I thought I was so on the ball.  I really did. But while I was busy riding my bike, playing with my kid, and looking at rentals with my wife, David Gorski and my other medical blogger pals were out in Las Vegas at TAM discussing the very study I wanted to tell you about.)

The study, called “Active albuterol or placebo, sham acupuncture, or no intervention in asthma,” was done for reasons that are not clear to me. It may have been done not to test the effectiveness of asthma therapy but to look at what a “placebo” might really be or do.  At least, I think that was the idea.  When reading the abstract and full text, it’s not actually clear why the study was done.  At first it seems as if it were done to see why asthmatics treated with placebo improve:

In prospective experimental studies in patients with asthma, it is difficult to determine whether responses to placebo differ from the natural course of physiological changes that occur without any intervention.

Why ask such a question? We know that poorly-treated asthma is deadly, and well treated asthma much less so.  Why do we care about placebo effects here?  The authors explain further:

Placebo effects (i.e., benefits resulting from simulated treatment or the experience of receiving care) are reported to improve signs and symptoms of many diseases in clinical trials and in clinical practice. On this basis, the accepted standards for clinical-trial design specify that the effects of active treatment should ideally be compared with the effects of placebo. Despite this common practice, it is unclear whether placebo effects observed in clinical trials (or those that presumably occur in clinical care) influence both objective and subjective outcomes and whether placebo effects differ from the natural course of disease or regression to the mean.

In other words, the authors want to know what placebos actually do to real people, and they chose asthmatics because they are easy to study (there are symptom-assessment tools for subjective data and spirometry for objective data).   This makes asthma both the right and wrong choice for the study.  It’s an excellent model to assess the affect of placebo, but one in which the use of placebo is hard to justify on an ethical basis.

Not surprisingly, they found that “doing something” worked better than doing nothing.  More specifically, they found that any placebo will make a patient feel subjectively better than doing nothing at all.   They also found that all three placebos (sham acupuncture, fake inhaled medicine, and simply being enrolled in the study without treatment) improved objective measures of lung function, but not nearly as much as real medicine (in fact, not much at all).

In other words, simply attending to a patient makes them feel better.  But to get a significant objective improvement (in asthma at least) you must also give them real medicine.  Real medicine comprises both active medications and attending to the patient.  There is no separate “placebo” that can be given to treat asthma effectively.

This is actually a quite beautiful study.  It demonstrates that “placebo effect” is not the same as a real treatment, that real treatment always includes whatever benefit placebo provides, and that placebo is mostly an effect on subjective rather than objective measures of health.  You can’t fix asthma with placebo, only with real treatment.  But we’ve already known that from decades of studying asthma.  So what other justification is there for doing this study?

Our research has important implications both for the treatment of asthma and for clinical-trial design in general. Many patients with asthma have symptoms that remain uncontrolled, and the discrepancy between objective pulmonary function and patients’ self-reports noted in this study suggests that subjective improvement in asthma should be interpreted with caution and that objective outcomes should be more heavily relied on for optimal asthma care. Indeed, although improvement in objective measures of lung function would be expected to correlate with subjective measures, our study suggests that in clinical trials, reliance solely on subjective outcomes may be inherently unreliable, since they may be significantly influenced by placebo effects. However, even though objective physiological measures (e.g., FEV1) are important, other outcomes such as emergency room visits and quality-of-life metrics may be more clinically relevant to patients and physicians. Although placebos remain an essential component of clinical trials to validate objective findings, assessment of the course of the disease without treatment, if medically appropriate, is essential in the evaluation of patient-reported outcomes. (Emphasis mine, PalMD)

This is folly.  First, we have a huge literature on quality of life metrics in asthma.  Huge.  And we also know that objective changes in asthma are what save patients’ lives.  Yes, I care how my patient feels, but it is not more “clinically relevant” than how they are actually doing physiologically.  Both are important, but not equal.  And the idea that comparing active treatment to placebo is not ideal is not new to researchers.  It’s simply that following the natural history of the disease as a “control” is not usually appropriate (cf. Tuskegee syphilis experiment).

No good clinician would consider treating an asthmatic with placebo.  Improper treatment of asthma leads to debility and death.  This study chose mild asthmatics, but I still feel very uncomfortable with the ethics of the study design.  Rather than using a disease we know how to treat to study placebo, we should be finding ways to get treatment to the millions of people who aren’t getting it.