2015 NHIS Report on Complementary Health Approaches (whatever that means) 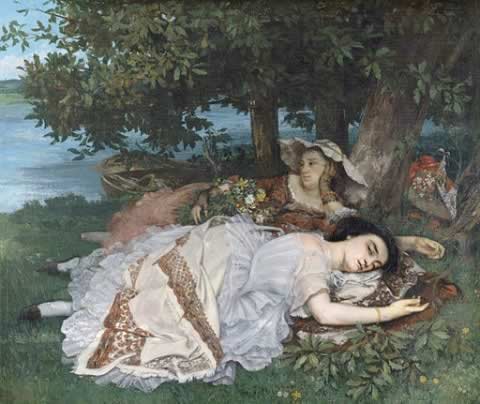 Formerly known as “relaxing,” now known as a “complementary health approach.” Gustav Courbet, “Young ladies on the banks of the Seine,” 1857. Public domain, via Wikimedia Commons.

Back in 2004, data from the 2002 National Health Interview Survey (NHIS) appeared in a report titled “Complementary and Alternative Medicine Use Among Adults: United States, 2002.” It showed a whopping 62% of adults had used CAM in the past 12 months, but only if prayer for health reasons was included. With prayer excluded, the percentage was substantially lower, at 35%.

“CAM” was defined as:

a group of diverse medical and health care systems, therapies, and products that are not presently considered to be part of conventional medicine.

The authors noted that, in earlier surveys of CAM use, “CAM has been operationally defined in a variety of ways” and the lists of CAM interventions/therapies included “varied considerably among the surveys.”

The most commonly used CAM therapies (excluding prayer) were non-vitamin, non-mineral natural products (18.9%), deep breathing exercises (11.6%), chiropractic care (7.5%), yoga (5.1%), massage (5.0%) and diet-based therapies (3.5%). CAM was most often used to treat back pain or problems, head or chest colds, neck pain or problems, joint pain or stiffness, and anxiety or depression. Most CAM use was self-prescribed. Rebranding things like exercise (yoga) as “CAM” was in the mix from the get-go.

Non-vitamin, non-mineral natural products used most frequently were Echinacea, ginseng, Ginkgo biloba, and garlic supplements. (I am leaving out percentages because the period covered, as well the way of calculating percentages, changed from year to year, and I gave up.)

All in all, the authors found the results “surprising given the lack of definitive evidence supporting the safety and efficacy of most CAM interventions.”

In 2008, analysis of more recent data from the NHIS was published: “Complementary and Alternative Medicine Use Among Adults and Children: United States, 2007.” This time, CAM was defined as:

a heterogeneous spectrum of ancient to new-age approaches that purport to prevent or treat disease. By definition, CAM practices are not part of conventional medicine because there is insufficient proof that they are safe and effective.

Or, in more condensed language, CAM was defined as practices that have insufficient proof of safety and effectiveness.

Overall use by adults jumped to 38%. Yet, the therapies most commonly used by adults and their percentages didn’t change all that much: non-vitamin, non-mineral, natural products (17.7%), deep breathing exercises (12.7%), meditation (9.4%), chiropractic or osteopathic manipulation (8.6%), massage (8.3%), and yoga (6.1%) were at the top of the list.

Adults most often used CAM for the pretty much the same things as the 2004 article reported: back pain or problems, neck pain or problems, joint pain or stiffness or other joint conditions, arthritis, anxiety and depression, and other musculoskeletal conditions. However, use for head and chest colds decreased markedly.

Of the top 4 natural products, only Echinacea remained. Fish oil, omega-3 fatty acids and DHA were at the top of the list. Glucosamine and flaxseed oil or pills made the top four as well.

The most interesting insight of the 2004 Report was not so much CAM use as it was CAM use versus CAM research:

The attention given by the scientific community does not correlate with the prevalence of use by the public as measured by the 2007 NHIS. For example, the Institute of Medicine identified 79 systematic reviews of acupuncture and 38 studies of homeopathy, placing them 3rd and 4th among all CAM therapies. Yet NHIS found that less than 1.5% of the adult U.S. public used each of these therapies in a given year. In fact, there is no meaningful correlation between the number of published studies of a CAM therapy and its use by the U.S. public. CAM therapies with relatively infrequent use by the public (e.g., biofeedback, hypnotherapy, acupuncture) are those with the highest level of acceptance and referral by physician groups, including pediatricians.

On February 10, 2015, a new Report was unveiled: “Trends in the Use of Complementary Health Approaches Among Adults: United States, 2002-2012.” A separate Report covered children.

Once again, complementary medicine was redefined. In fact, it’s not even “medicine” anymore. With no explanation for the change that I could find, complementary and alternative medicine is no more; we are now looking at “complementary health approaches,” which are

an array of modalities and products with a history of use or origins outside of conventional Western medicine.

“Alternative” and “medicine” were not the only things dropped. For reasons that are not explained, statistics regarding, or discussion of, the diseases or conditions for which consumers are using these “health approaches” is missing from the article. That is not to say it might not be somewhere in the information gathered in the survey, but it is a mystery why the authors wouldn’t mention it. After all, as the authors state, these surveys were designed to help guide the NCCIH (f/k/a NCCAM) research agenda, which, according to the authors, has now shifted from disease treatment to symptom management and “the promotion of optimal health,” whatever “optimal health” might be.

The top four supplements were fish oil, glucosamine or chondroitin, probiotics or prebiotics, and melatonin.

I find these Reports both interesting and disturbing. Obviously, it is interesting to read what healthcare practices people are using. But the disturbing elements predominate.

The definitional calisthenics on display over a decade of NHIS surveys of alternative/complementary medicine/healthcare approaches is simply a symptom of the real problem underlying the whole enterprise, one that has vexed us here at SBM since the beginning. Kimball Atwood tackled it early on in two posts documenting the slide from “quackery” to “CAM.” More recently, David Gorski blogged about yet another definitional reboot when the National Center for Complementary and Alternative Medicine changed its name to the National Center for Research on Complementary and Integrative Health, not long after Mark Crislip weighed in on the “loose” terms of SCAM.

I’ll add my observations, if not a better understanding or a solution.

“Western conventional medicine” is characterized by the rational application of science to healthcare practices, one feature of which is determining efficacy and safety, as best we can, in advance of using any particular treatment. But “Western conventional medicine” doesn’t have to be the exclusive repository of those characteristics. Any healthcare discipline or practice can take up science and evidence as its standard. Acupuncture, chiropractic and naturopathy are, in varying degrees, Western, conventional and medicine, but none is all of those. Yet any of these disciplines is more than welcome to employ science and evidence, as are the dietary supplement or homeopathic industries. But they don’t, or at least not consistently or reliably.

That is the key difference and that is the distinction that must be made when discussing these practices, instead of using some fabricated terms that paper over what is really going on. NCCIH and the NHIS Reports admit that evidence is an issue, but NCCIH doesn’t want to make it clear that it is also the difference that really matters. And by the way, it’s unfortunate to see the NHIS dragged into this by NCCIH’s apparently false assurance that the results would “guide” their research agenda. If that is truly the case, why so much acupuncture research? According to the NCCIH website, they are still into acupuncture, now in cahoots with the military:

the report proposes expanded collaboration between NCCIH and the U.S. Department of Defense (DoD) and the Department of Veterans Affairs (VA) to test approaches to pain management that integrate complementary treatments such as acupuncture, massage, and meditation with conventional models of care.

Because of my interest in CAM practitioner licensing and other legislation affecting CAM practices, such as DSHEA, I was also struck by the tremendous gap between what these laws permit and what people are actually doing. Why are legislatures defining the chiropractic scope of practice to include the diagnosis and treatment of almost any disease or condition when, by far, the only thing people use them for is a limited range of musculoskeletal problems? Why do so many states license acupuncturists and give them leeway to use all sorts of nonsense on patients when hardly anyone uses them for anything? And why do states continue to fall for pleas for naturopathic licensing when there is no demand? Why the hassle of a regulatory board and the other accouterments of bureaucracy to accommodate a handful of people?

Finally, consumer demand as an excuse for “integrative medicine” is a bunch of hooey. The idea that patients are “demanding” acupuncture is just nonsense. Looks like some physicians are the ones demanding acupuncture and acupuncture research, in spite of, not because of, patient demand. Other popular integrative medicine center practices, such as cranial sacral therapy, reiki and energy healing are registering at below 3%.

I’ve come to believe that CAM and “integrative medicine” is mostly about money and ideology, not patients. Money from research, money from academic and government jobs beholden to perpetuating CAM, money from selling CAM products and services, money from education and training in CAM. Fortunately, despite the efforts of the many people whose livelihood depends on CAM, the public seems remarkably resistant to their efforts. They tend to cluster around treatments that, if not supported by sufficient evidence of safety and effectiveness, at least have some plausible potential for helping them, even it turns out to be an unrealized potential: spinal manipulation for musculoskeletal issues, supplements like fish oil, relaxation techniques like deep breathing and exercise practices like yoga. It is amazing that so few have been fooled by so many who are trying so hard. It’s not ideal, it’s not an excuse to tolerate CAM, and it’s not a reason to become complacent, but it does look like consumers are smarter than the ideologues and money makers give them credit for.