Does smoking worsen COVID infections? Or is it protective? As more evidence emerges, the smoke is starting to clear.

With new data appearing so quickly, it’s impossible to keep up with the flood of new scientific and clinical information emerging about COVID-19. The unknowns are still considerable, however, and as of time of writing there are no demonstrably effective treatments to prevent or treat COVID. This uncertainty has led to experimentation and even speculation about whether existing drugs could potentially be repurposed. I have an ongoing poll with my pharmacist colleagues over which drug product will be touted as the next treatment for COVID. First it was hydroxychloroquine and azithromycin, which after some unfounded hype may actually cause more harm than good. Last week famotidine (Pepcid), a popular over-the-counter stomach acid suppressant was identified as potentially beneficial. (My hunch is that even the humble neti pot will, at some point, be touted as a treatment.) Among the products I would not expect to be touted as possibly effective against COVID is something that already kills 7 million people per year. I was admittedly surprised in late April when France was reported as restricting sales of nicotine replacement medicines (like gums and patches) after a unpublished (preprint) study suggested that tobacco smoking appeared to be protective, as smokers were under-represented in COVID cases and deaths, consistent with signals that some researchers suggest may exist in Chinese data. The analysis, which received considerable media attention, concluded:

Our cross sectional study in both COVID-19 out- and inpatients strongly suggests that daily smokers have a very much lower probability of developing symptomatic or severe SARS-CoV-2 infection as compared to the general population.

So is smoking potentially protective? As they say, it’s a bit more complicated than that.

The Pitié-Salpêtrière analysis was a survey of the smoking incidence among hospitalized and non-hospitalized COVID patients. The patient-reported rates were compared to the French population, and standardized for age and sex. Eligible patients were those hospitalized (non-ICU) or had consulted and diagnosed with COVID but were recovering at home. Data was collected from February through April, 2020. Smoking status was obtained by direct questions, and the frequency and type of smoking (e.g., cigars, cigarettes) was documented.

Overall 343 inpatients and 139 outpatients were included. The demographics were as follows:

It’s the comparison with the general population where it gets interesting. In the image below you can see the Standardized Incidence Ratio (SIR) which are age- and sex-adjusted smoking rates based on a 2018 survey of almost 10,000 individuals in France, compared with the population smoking rates in (A) outpatients and (B) inpatients. The survey suggests that smokers are dramatically under-represented among COVID patients: 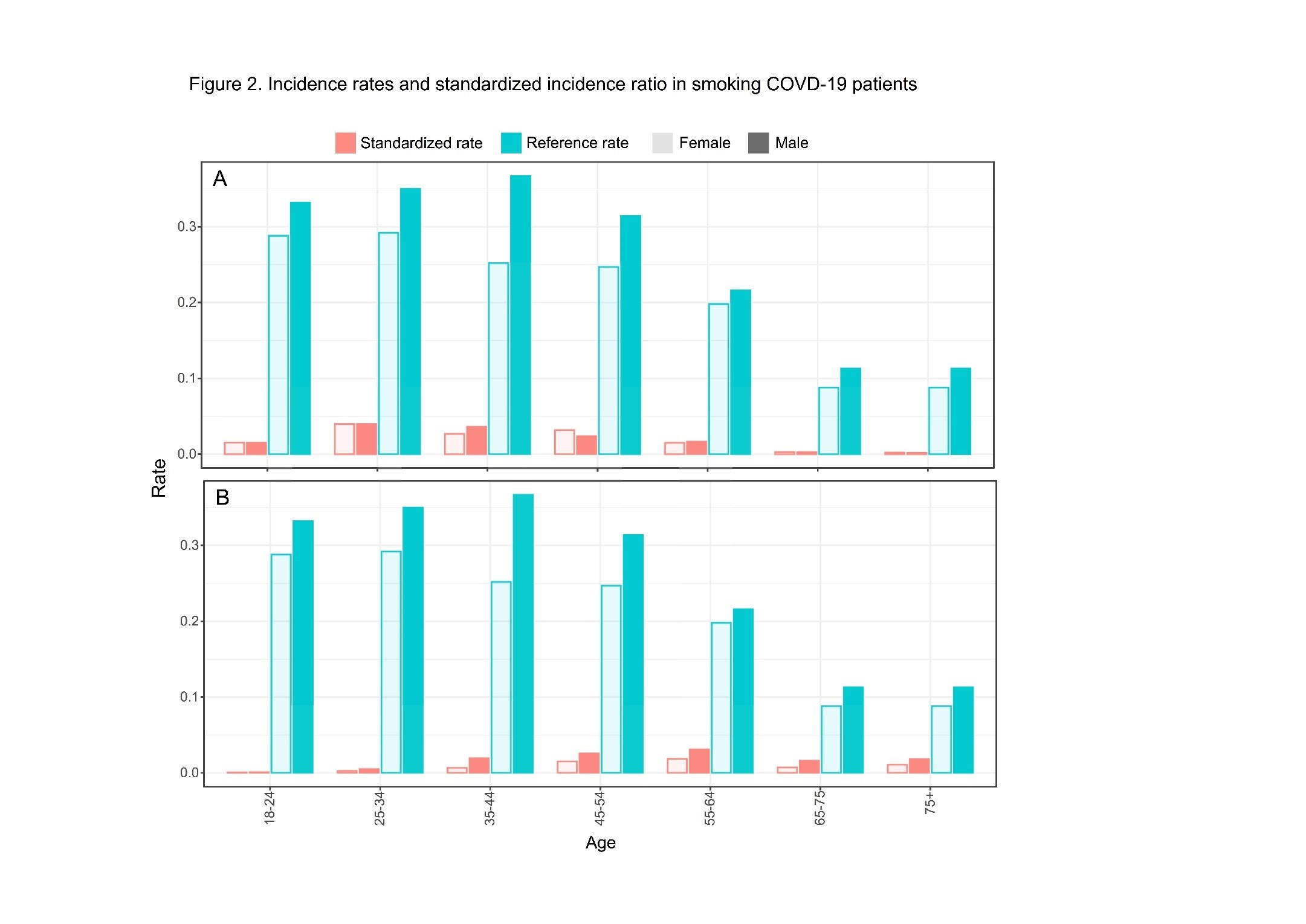 One of the glaring gaps in this survey is that it didn’t include ICU patients – so we don’t know if smokers ended up with significantly worse outcomes. Or never made it to the hospital at all. The observed differences are interesting, but that’s about all we can say: a cross-sectional survey cannot establish causality – just correlation. There could be one or more confounders. Smokers could have been under-represented among COVID patients for other reasons (e.g., the proportion that were health care workers may have been high.) Smoking could have been under-reported because patients may not have wanted to disclose this information. Still, the results feed the hypothesis that there are one or more chemicals in cigarette smoke that could be modulating viral action. They authors speculate that it could be nicotine’s interaction with the angiotensin converting enzyme 2 (ACE2) receptor (the receptor targeted by ACE inhibitor drugs).

Based on the results of this study, multiple groups appear to be launching clinical trials with nicotine-replacement products like patches. Whether there’s a real effect at all, or if nicotine patches are a good substitute for cigarettes (when it comes to these findings) remains to be seen. The authors did point out that their findings seem to be supported by another analysis of clusters of COVID infections in Oise, France. In that analysis they examined 661 people and found that smokers were significantly less likely to have an infection compared to non smokers (7.2% vs. 28%, which was statistically significant). Many of the limitations in this analysis are the same.

Puzzling data from the NHS

Ben Goldacre, who is no stranger to regular readers of this blog, was the senior author of a massive analysis of 17.4 million UK adults to determine risk factors associated with COVID death. An electronic health record dataset was linked to a registry of COVID deaths. The dataset included 5,707 deaths from COVID and identified factors associated with death. These factors include being male, older age, uncontrolled diabetes, severe asthma, and ethnicity. Available as a preprint (and has not yet undergone peer review), it also included smoking status in its analysis. Here is their comment on smoking:

Both current and former smoking were associated with higher risk in models adjusted for age and sex only, but in the fully adjusted model there was weak evidence of a slightly lower risk in current smokers (fully adjusted HRs 0.88, CI 0.79-0.99). In post-hoc analyses we added individual covariates to the model with age, sex and smoking to explore this further: the change in HR appeared to be largely driven by adjustment for chronic respiratory disease (HR 0.93, 0.83-1.04 after adjustment) and deprivation (HR 0.98, 0.88-1.10 after adjustment). Other individual adjustments did not remove the positive association between current smoking and outcome.

It is possible that there was a confounder here – respiratory status – something pointed out in a thoughtful Medscape editorial on the paper by Perry Wilson:

The fully adjusted model adjusts for respiratory disease. So when we look at the adjusted risk of smoking, what we are saying is, basically, If all these smokers didn’t have respiratory disease, they’d actually be more likely to survive COVID-19 than nonsmokers. Okay. But that’s just like saying, If all these people who don’t wear their seatbelt didn’t fly through the window, they’d be more likely to survive car accidents. Fine, I guess, but definitely not a reason to take off your seatbelt. The researchers actually looked at this, and found—sure enough—that all you have to do is adjust for respiratory disease to make smoking look protective. The key take-home here is that you need to be super-thoughtful when you are trying to assess causality in observational data. “Adjust for everything” is not a good strategy because you run the risk of adjusting for things on the causal pathway, which totally screws up your results.

So while some of the headlines can’t resist the “Smoking may be protective” story here, a cautious read of the study, and its limitations, doesn’t suggest that idea is well supported.

Finally, I’ll comment a few other papers that have appeared in the past few days. First, a peer-reviewed study that was published just three days ago. It examines chronic obstructive pulmonary disease (COPD) and smoking in patients with COVID-19. This was a meta-analysis (a study of 15 studies) including 2,473 COVID patients. All but one of the studies were in China. Smoking history was reported in eight of these studies, encompassing 221 COVID cases. This paper concluded that the prevalence of COPD among this group of COVID patients was low but COPD patients were at higher risk of more severe disease, which was associated with significantly higher mortality. The prevalence of current smokers in COVID patients in this sample was 9% (while the reported Chinese prevalence is about 25%). Current smokers were about 1.5x more likely to have severe complications of COVID compared to former/never smokers. Current smokers were also noted to have a higher mortality rate.

Another paper posted three days ago is the work of three Canadian researchers who have looked at the UK Biobank, to examine if smokers may be less likely to test positive for COVID compared to non-smokers. Of the <500,000 individuals in the BioBank, 2,237 individuals were tested for COVID between March 16 and April 26. In that sample, 908 testing positive, suggesting that testing is concentrated in those considered to be at high risk of disease. Smoking prevalence at enrollment was slightly but not significantly lower in those that tested positive. (16.6% vs. 17.5%). After adjusting for different variables, current smokers were slightly more likely to test positive for COVID, but again the difference was non-significant.

In a paper that was published yesterday (May 13) in Nicotine and Tobacco Research, researchers summarized 19 peer-reviewed papers (from China, South Korea, and the US) that examined the association between smoking and the severity of COVID in hospitalized and non-hospitalized patients. This was a systematic search that encompassed 11,590 COVID patients. The outcome of interest was progression of COVID to severe/critical conditions or death. Of the population studied, 2,133 experienced disease progression. 29.8% of smokers experienced disease progression, compared with 17.6% of non-smokers. The authors conclude that smokers with COVID appear to have 1.91x odds of worsening disease, compared to non-smokers. While the prevalence of smoking among COVID patients was low, the authors suggest there may be other factors leading to this finding:

“The fact that smoking prevalence is lower among COVID patients than the general population has been cited as evidence for a protective effect of smoking,” said Roengrudee Patanavanich, MD, PhD, a visiting scholar at UCSF from the Department of Community Medicine at Ramathibodi Hospital at Mahidol University, Thailand. “But this low prevalence may actually be due to an under-assessment of smoking, especially when you consider the difficult conditions involved when caring for people in often overwhelmed health systems.”

Conclusion: Probably not a good idea to take up smoking

Early (March 2020) data on Chinese COVID patients identified the low prevalence of smoking noted among hospitalized patients. This led to the hypothesis that smoking, or perhaps nicotine itself, may provide some protection against infection or worsening disease. Data that has emerged since that time does not give strong support to the “smoking is protective” hypothesis. There is no question that cigarette smoking causes lung damage, and it kills millions per year. Whether or not nicotine has any beneficial effects on COVID is a related but distinct question that is now under investigation, using nicotine replacement (patches) to study the question. Over the next several months, better data should be available to provide a more definitive response. Until that time, quitting smoking (or not starting) even during a pandemic, remains an appropriate health strategy.