In his new video series, Dr. Mark Hyman says your brain is broken and functional medicine can fix it. He mixes conventional healthy lifestyle advice with highly questionable claims and recommendations based on speculation rather than on evidence. 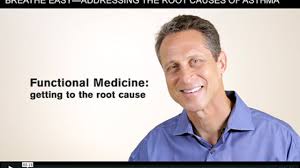 Mark Hyman has a new series of 8 documentaries on The Broken Brain. He interviews over 50 “experts” carefully selected to agree with his ideas, with nary a word of dissent. He says we are experiencing an epidemic of broken brains, manifesting as anxiety, depression, ADHD, autism, Alzheimer’s, bipolar disorder, and a host of other mental disorders. Even if you don’t have one of those, you may be suffering from subtle symptoms like poor memory, poor sleep, poor concentration, brain fog, etc. Even if you think you are healthy, you could be better. And he claims to have the solution: following his recommendations will not only heal you but will take you beyond normal to optimal functioning. He says brain diseases, and pretty much all diseases, can be prevented.

If only that were true!

Who is Mark Hyman?

Mark Hyman, MD, is a sort of poster boy for functional medicine. He is the Chairman of the Institute for Functional Medicine, founder of the UltraWellness Center, and a best-selling author of books like Ultramind, Ultrametabolism, The Blood Sugar Solution: A 10 Day Detox Diet, and coauthor of The Daniel Plan, a diet based on Biblical principles. He is on the staff of the Center for Functional Medicine at the Cleveland Clinic. He is a medical advisor to Bill and Hillary Clinton. He sells dietary supplements and detox cleanses. He has said that the law of thermodynamics doesn’t apply in living organisms, and that current medicine is as obsolete as bloodletting or phrenology. He says diseases don’t exist. He is essentially a germ theory denialist, saying it’s the terrain, not the germ.

What is functional medicine?

The Wikipedia article on Mark Hyman calls functional medicine “a discredited set of pseudoscientific beliefs.” Jeffrey Bland, a PhD, not an MD, invented functional medicine and Hyman became a convert after attending one of his lectures. It is vaguely defined as a systems approach that focuses on identifying and treating underlying causes. It emphasizes prevention, individualizes treatment, and aspires to optimization rather than just normalization of function.

Back in 2009, SBM’s own Wally Sampson wrote a series of four articles about functional medicine. Here, here, here, and here.

None of this FM lays out a map from which one can get from here to there…. Claims [are] cloaked in the language of science, but with the distinguishing characteristics of sectarianism – pluralities of approaches to illness, absence of evidence for efficacy, a unifying concept of illness as a body out of sync with Nature (with the capital N), undecipherable babble, and descriptive word salad.

David Gorski has criticized functional medicine, calling it “a form of quackery that combines the worst aspects of conventional medicine and alternative medicine,” with massive over-testing and a “make it up as you go” ethic. He has described how it was typically implemented in the case of an 80-year-old woman with breast cancer. After conventional treatment and surgery that was probably curative, she was subjected to 154(!) unnecessary, nonstandard lab tests (like urine representativeness index) and numerous useless and possibly even dangerous interventions (97 IV infusions of vitamin C, a long list of supplements including a “standardized herbal inflammation relief supplement,” melatonin, probiotics, and a medical food shake, a dairy free/gluten free diet, and more) that did nothing to change her outcome.

The title The Broken Brain is really a misnomer. Hyman says it’s actually the whole body that is broken, and dysfunctions elsewhere cause problems in the brain. The standard medical approach of “name it blame it tame it (with drugs)” is misguided. There is a new paradigm. The idea of diagnosing patients with diseases is obsolete; there are really no such things as diseases. Everything is connected. By optimizing bodily health, autism, dementia, and bipolar disorder can be reversed. He says he sees miracles every day in his practice. He has seen patients completely recover from autism by simply taking cod liver oil. A woman’s Alzheimer’s disease reversed when he gave her thyroid supplements for a “slight imbalance.”

He tells his own story of recovery from depression, anxiety, and extreme fatigue. He says heavy metal toxicity, deficient diet, high stress levels, and a leaky gut created the perfect storm that led to his broken brain. Different specialists made different diagnoses and were unable to help him. After he became a convert to functional medicine, he “peeled the layers” and gradually got better using the roadmap of FM. “The problem wasn’t in my brain, it was in my body. All that inflammation, toxicity, gut dysfunction was feeding back up to my brain.” It was a slow process. He discovered he had mercury poisoning. He went on an elimination diet of turkey, broccoli and rice. He had to find all the causes, one after another. He compares it to standing on several tacks: removing just one tack doesn’t solve the problem. Which directly contradicts his claim to have reversed autism and Alzheimer’s with single interventions.

His seven steps to an ultramind are:

And also: exercise, community, and other important stuff like supplements. You can buy supplements at Hyman’s online store. He sells an Eat Fat, Get Thin Support Kit, a 10-day Detox Diet Basic Kit, Blood Sugar Solution Supplements, a Regulate Male Hormone Kit, an Enhance Energy Metabolism Kit, and much more.

The six-week jumpstart plan to heal your brain:

There are a lot of questionable claims and recommendations in the videos, some of which are demonstrably wrong and none of which are based on acceptable evidence. Some examples:

Either Mark Hyman copied the idea from Peggy Sarlin or they both learned from the same marketing expert. Peggy produced a series of 14 videos on “Awakening from Alzheimer’s,” claiming that Alzheimer’s is largely preventable and can be reversed in 9 out of 10 patients. I wrote a SkepDoc column critiquing her series; it is scheduled to appear in the next issue of Skeptic magazine. Like Hyman, she interviewed a number of different experts who all had different approaches. They recommended everything from coconut oil to banana peel tea, multiple supplements, avoiding gluten, etc. Like Hyman, they told miraculous success stories. Like Hyman, they talked about “leaky gut syndrome,” a hypothetical condition not recognized by medical science. Both mentioned chronic Lyme disease, which doesn’t exist.

Think about it: if they really had a cure for Alzheimer’s or for all brain diseases, would we have to watch a series of videos to learn about it? Wouldn’t it be all over the news? Wouldn’t someone win a Nobel Prize? Wouldn’t it be irresponsible not to share it with the world for free?

The videos were made available for free, but each video was only available for 24 hours, making it easy to miss an episode. This encourages the viewer to buy a package of all the videos plus supplementary materials, for $99 and up. Or you can buy the books. These video marketing schemes are a clever ploy to make money; it’s marketing genius!

The fallacies of functional medicine

Hyman is trying to promote functional medicine, but in these videos he inadvertently exposes the fallacies of that approach. He isn’t even doing what he claims to be doing.

But if everyone is different, how could you possibly know how to treat each of them? If there are multiple underlying causes, how can Hyman report having cured patients with a single intervention? If there are multiple underlying causes, how can you determine which ones apply to which patient? You can’t. All you can do is what Hyman does: throw everything but the kitchen sink at them and see what sticks. Try one thing and if it doesn’t work, add another thing. Guesswork. Uncontrolled experimentation. Forget about the scientific method and the need to test every claim systematically; that’s not in Hyman’s paradigm.

And of course, the seven steps to an ultramind and the 6-week jumpstart plan are anything but individualized: he recommends them for everyone.

If everything is connected in an interlocking web, how could you possibly know enough to intervene at one point of the web? Wouldn’t that cause unexpected effects elsewhere in the web?

The idea that Hyman is looking for and finding “the underlying cause” is ludicrous. He merely lists all the possible underlying causes he can think of and tries to treat all of them. He speaks of the “roadmap” of FM. There is no such roadmap, just unsystematic trial and error.

It is silly to think functional medicine understands the underlying causes and can identify them and appropriately individualize treatments. Functional medicine is a blind doctor leading a blind patient, trying anything and everything that they hope might possibly help.

Functional medicine hasn’t discovered anything new. We already knew the brain affects the rest of the body and the body affects the brain. We knew the body and mind are connected into an interlocking whole. Everyone knows lifestyle is important for health: exercise, healthy diet, stress reduction, adequate sleep, and interaction with other people all matter. Functional medicine pretends to know things about diet that are not based on evidence. It pretends to know that we all need dietary supplements and which ones we need. It pretends deep understandings that it simply doesn’t have. It pretends that it knows how to use non-standard tests to effectively guide treatment. It pretends to know how to create optimal functioning, but it has never demonstrated that it can do that, or even that there are levels of functioning greater than “normal.” The functional medicine approach has never been tested to find out if it can produce better outcomes than the science-based medicine approach.

The video series The Broken Brain is not a reliable source of medical information. Hyman includes standard advice about a healthy lifestyle, but he mixes it indiscriminately with advice that is based on speculation rather than on credible evidence. And he makes claims that defy belief (curing autism with cod liver oil) and many that are demonstrably not true.

What’s good about functional medicine is not unique, and what’s unique about it is not good…it takes “making it up as you go along” to a whole new level, and that’s not a good thing in medicine.