Dr. Sampson’s droll post on Thursday written from the point of view of an advocate of unscientific “alternative” medicine modalites (these days known as “complementary and alternative medicine”–abbreviated “CAM”–or “integrative” medicine), coupled with Dr. Atwood’s most recent contribution to his ongoing series on how the mish-mash of a little valid herbal medicine mixed with a whole lot of woo otherwise known as the “profession” of naturopathy is pushing for greater legal legitimacy, depressed me mightily. The posts depressed me because they are but more evidence of just how effective advocates of non-science-based medicine have been over the last several years at twisting the linguistic landscape to their advantage and winning. Indeed, I’ve written about this before on this very blog, including my (in)famous list of medical schools that have embraced CAM and my lament about a medical school that has even gone so far as to “integrate” so-called “integrative” medicine into every aspect of its curriculum from day one of the first year. These disheartening trends accompany and draw succor from the $120 million a year budget of that center of woo in the heart of the National Institutes of Health, the National Center for Complementary and Alternative Medicine, the equal amount of money coming yearly from, alas, the National Cancer Institute, and, of course, the financial clout of the Bravewell Collaborative.

Things are not looking good for science-based medicine in academia right now. I say this in particular because I just learned of a press release issued three weeks ago by Andrew Weil and his University of Arizona Program in Integrative Medicine that, as Emeril Lagasse would say, “Kicks it up a notch,” but not for the better.

TUCSON, Ariz., June 12 AZ-UofA-CoMPIM-Award TUCSON, Ariz., June 12 /PRNewswire/ — The Arizona Board of Regents recently conferred Center of Excellence status on The University of Arizona College of Medicine Program in Integrative Medicine — a move that reaffirms the positive impact integrative medicine has had on health-care system transformation.

Now known as the Arizona Center for Integrative Medicine (AzCIM), the program underwent an intensive evaluation process and earned unanimous endorsements from UA health sciences program directors and college deans. The new designation formally recognizes the center’s achievements in the field over the past 14 years, and its status as the world leader in integrative medical education.

Founded in 1994 by internationally renowned author and integrative medicine pioneer Andrew Weil, MD, the Arizona Center for Integrative Medicine joins nine other Centers of Excellence at the UA College of Medicine.

“Having our work recognized in this way is among our greatest accomplishments to date,” Dr. Weil said. “The Center of Excellence designation formally recognizes us as an innovator in educating the next generation of physicians and health-care professionals. Our challenge now is to remain at the forefront of innovation so as to make integrative medicine available to everyone, regardless of economic or geographic limitation.”

Indeed it is one of Andrew Weil’s greatest accomplishments in pushing his not-so-unique blend of some science-based nutrition advice mixed with a whole lot of woo. Steven Novella once rightly referred to him as wanting to change the rules of scientific evidence supporting the efficacy (or lack of efficacy) of various medical interventions, and indeed he clearly does, favoring “uncontrolled clinical observations” over well-controlled, double-blind randomized trials:

But for all the other stuff, we don’t have time to do that, so we have to have other methods of estimating how things work. Now one of the attitudes that I run into in the research community that just drives me up the wall is people who dismiss what they call anecdotal evidence. And I have challenged some of these people in public to strike the word “anecdote” from the medical vocabulary.

I think it is a trivializing word. If you want to call this uncontrolled clinical observation, that’s fine with me. The fact is that the scientific method begins with raw observation. You notice something out there that catches your attention, that doesn’t fit your conceptions. You see it again. That gives you an idea that generates a hypothesis which you can then test. It is this kind of uncontrolled observation which is the raw material from which you get hypotheses to test in a formal manner. If you dismiss all that stuff, if you drop it into a mental wastebasket labeled “anecdote,” you cut yourself off from the raw material of science.

Of course, Dr. Weil is being disingenuous. In science- and evidence-based medicine, anecdotes are indeed the raw material from which we as medical scientists derive hypotheses, and “anecdotes” are published all the time in the medical literature. They’re called “case reports.” We do not dismiss them out of hand just because they are “anecdotes.” When appropriate, we dismiss “anecdotes” because frequently they are “testimonials” and not controlled observations or because anecdotes themselves, even when the observations are controlled, are often deceiving, which is why further study in the form of more controlled trials is always necessary before science-based medicine will accept a claim. Anecdotes are not enough, but doctors like Dr. Weil want to give them far more weight in medical science, often (as Dr. Weil does) reducing their arguments to a tu quoque fallacy, as Dr. Weil does in characterizing research on St. John’s Wort and depression as “useless information.”

But I digress. However it is a relevant digression, because the real effect of the CAM movement is to downplay the importance of science in medicine and to elevate anecdotal evidence far above what its role should be. In this, CAM is moving medicine back to the days of Hahnemann and homeopathy. Indeed, physicians like Dr. Weil are more dangerous than quacks like Hulda Clark, because he mixes his brand of unscientific medicine with enough scientific medicine to make it sound plausible and to blur the line between the two to the point that it is not always apparent even to skeptics where science ends and woo begins.

He’s succeeding, too, in transforming medicine in a way bigger than one “integrative” medicine program being recognized by its university as a so-called “center of excellence” (which makes me wonder just how low the University of Arizona’s standards are in that respect) indicates. The real significance of this press release is that it also announces another huge step made by Dr. Weil and his fellow ideologues in “integrating” non-scientific and non-evidence-based medicine into science- and evidence-based medicine. It is the next logical step after the “integration” of woo “seamlessly” into the medical school curriculum:

The Center of Excellence designation will enhance the center’s ability to court top-tier faculty and inspire a new era of program growth — led by the center’s most ambitious program to date: the Integrative Medicine in Residency (IMR). The center’s integrative medicine curriculum soon will be incorporated into standard three-year family medicine residency programs across the nation. Residents will learn to incorporate integrative medicine concepts into their practices, including patient-centered care techniques that facilitate lifestyle change.

“This will be the first program in the nation to create a required curriculum in integrative medicine for physicians during residency,” said Victoria Maizes, MD, executive director of the Arizona Center for Integrative Medicine. “Over the next 10 years, development of IMR into the national model for residency education is a major goal for the center. We will gradually move beyond primary care into subspecialty training.”

I can’t help but mention that clearly I need to add every one of the above medical schools and academic medical centers into my hall of shame, clearly a project for the impending Fourth of July weekend. That aside, this accomplishment represents a quantum leap in the infiltration of CAM into academia. In one fell swoop, Dr. Weil has transformed CAM from a mere elective to a fully co-equal and mandatory element of the family medicine residency. True, it’s only eight residencies now in a pilot program. However, given the current attitude in this country and in medicine, it’s highly likely that this pilot program will be “successful” (successful for woo, a disaster for science-based medicine), in which case it will spread, and it is no longer unthinkable to visualize something like IMR insinuating itself into the national standards of the American Board of Family Medicine in a decade–or even less. Certainly it doesn’t help that Medicare and third party reimbursements have become so paltry for primary care doctors that woo suddenly becomes attractive as an “alternative” (or should I say “integrative”) additional source of income; that only makes resisting it more difficult.

If Dr. Weil succeeds, every new family practice physician will graduate from his or her residency program with a knowledge of CAM. This would not be a bad thing if it were truly a science- and evidence-based approach to CAM and a knowledge of what herbal remedies might interact with “conventional” pharmaceuticals. The optimist in me would like to believe that that’s what would happen, but the realist in me knows that it’s not. Given the history of CAM programs in medical schools and academic medical centers thus far, where credulous promotion of quackery–yes, I say quackery–such as reiki, therapeutic touch, and even that quackery of quackeries, homeopathy, somehow manage to be “integrated” into science-based offerings with nary a word of skepticism about the extreme (and I do mean extreme) lack of scientific plausibility and the preponderance of scientific studies demonstrating no greater efficacy for these modalities than placebo, I fear that when I visualize myself in the hospital 20 or 30 years being subjected to therapies parodied in this video, I may look back at it as prophetic, not funny. Steve Novella was right to wonder whether a golden age of quackery and antiscience is upon us. My fear, though, is that 20 or 30 years from now, we will look back upon these days as beginning of the end and yearn for the level of science in medicine that we have today.

The Brave(well) New World is upon us. Resistance is futile. Your life as it has been is over. From this time forward, medical culture will adapt to service CAM. Science is irrelevant. 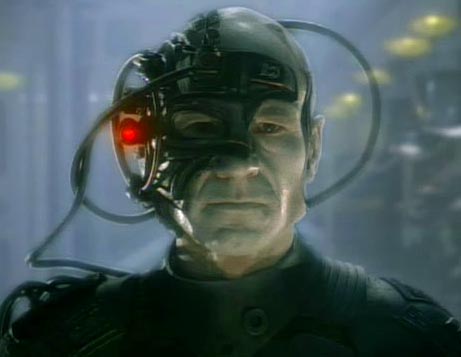