EverlyWell offers 34 at-home tests for everything from IgG tests for food sensitivities to a Sleep and Stress test. Most of them make no sense and are likely to mislead customers. 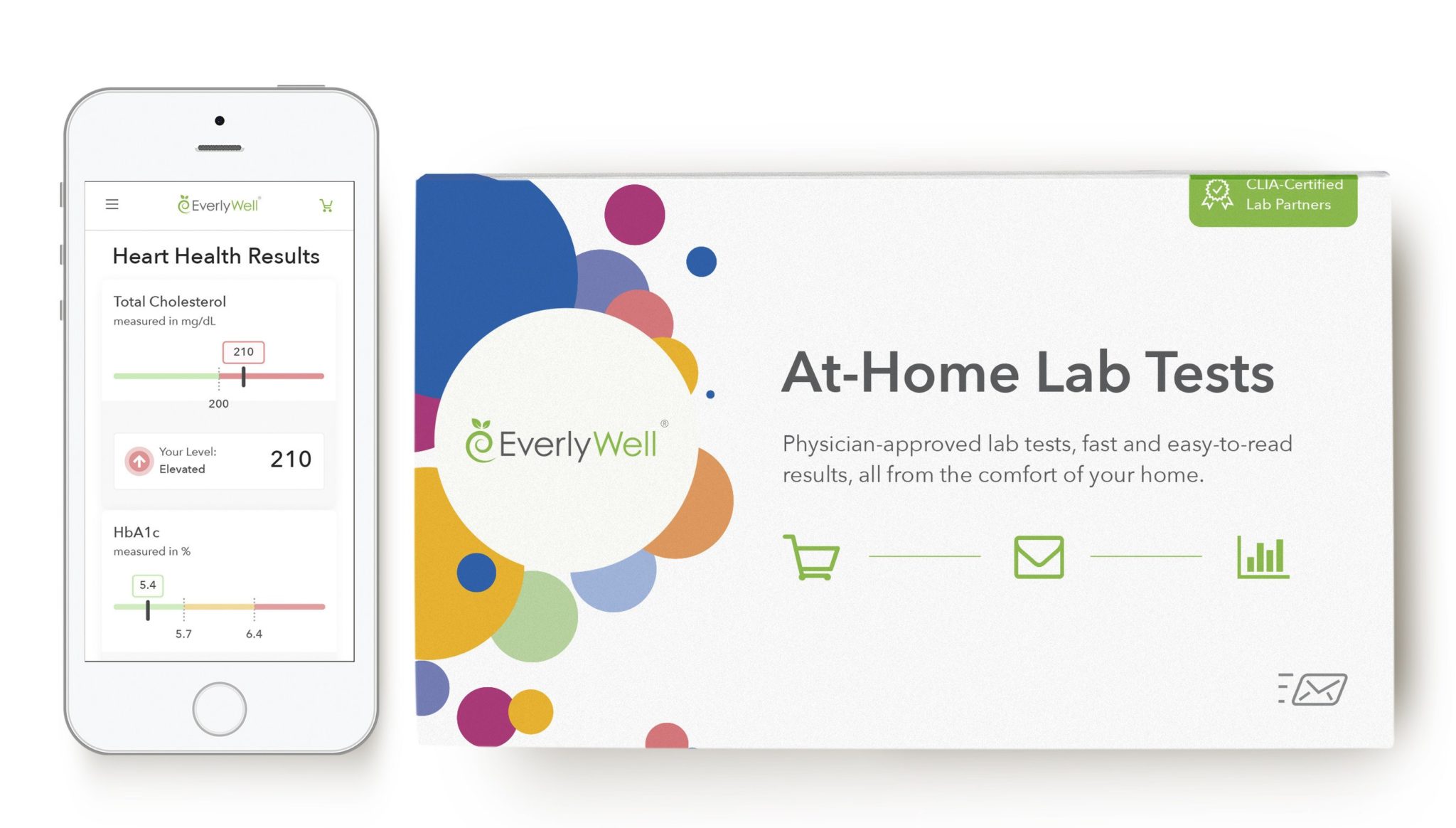 Here we go again! First I wrote about Theranos, then SmartJane, and now EverlyWell. More companies are jumping on the at-home testing bandwagon; apparently the convenience and the message of do-it-yourself empowerment appeal to enough customers to generate big profits. But most of these tests are not medically indicated and are more likely to mislead customers than to improve their health.

EverlyWell advertises “Lab testing made easy. Results you can understand.” They offer tests so you can learn about yourself. They say,

For each test, our medical team curates the biomarkers we think are the most useful and applicable to providing the health insights you care about [often they think wrong]. … Our tests are generally the same tests that your physician orders, and are supported by independent, peer-reviewed research.

I beg to differ. Some of the tests are tests that your physician would selectively order as part of a diagnostic workup for symptoms, but most of them are not supported by research as appropriate for screening purposes.

The two tests that they seem to be pushing are the Food Sensitivity Test and the Heart Health Test.

They actually offer two different food sensitivity tests. For $159 they measure IgG reactivity to 96 foods. For $249.99 you also get a saliva-based DNA test that looks for five specific genes that they think affect metabolism and absorption of certain foods and nutrients. Both tests are unreliable and not indicated.

The science of genetic testing has not yet advanced to the point that it is able to direct appropriate dietary changes for individuals. And testing for only five genes makes no sense: the expression of genes is affected by other factors and by genes they don’t test for or even know about.

As for IgG testing, the American Academy of Allergy Asthma and Immunology (and Scott) calls it a myth. They explain,

It is important to understand that this test has never been scientifically proven to be able to accomplish what it reports to do. The scientific studies that are provided to support the use of this test are often out of date, in non-reputable journals and many have not even used the IgG test in question. The presence of IgG is likely a normal response of the immune system to exposure to food. In fact, higher levels of IgG to foods may simply be associated with tolerance to those foods.

The Choosing Wisely campaign recommends against IgG testing for allergy. And our own Scott Gavura has spoken out against it after thoroughly reviewing the rationale and the evidence (or rather the lack of evidence).

For $79, this fingerstick test measures total cholesterol, HDL, Direct LDL, Triglycerides, hs-CRP and HbA1c. Reputable science-based sources acknowledge the heart health implications of cholesterol and diabetes but they do not recommend screening for triglycerides or CRP. Experts stress the importance of blood pressure, weight, smoking, and exercise, none of which are addressed by EverlyWell. Along with the Heart Health test results, EverlyWell promises to offer guidance in the form of suggestions to jumpstart a healthier lifestyle, but those suggestions apply to everyone and do not depend on test results. You would be better off consulting your own physician who can evaluate all your risk factors, put them into perspective, advise you, and provide treatment like statins when indicated.

They offer an astounding array of 34 tests. Some of them might make sense in some settings (HIV, HbA1c, Lyme disease test, thyroid tests, etc.) but your doctor should decide which ones to order. They should not be used indiscriminately as screening tests or just to satisfy idle curiosity. Some of them make no sense at all. I won’t try to cover them all, but here are some highlights:

For $199 they test a urine sample and a finger prick blood sample for chlamydia, gonorrhea, hepatitis C, herpes type 2, HIV, syphilis, and trichomoniasis. How does the validity of their tests compare to standard lab test results? We have no way of knowing. They claim to use certified, top-quality labs and reassure customers that:

Each partner lab we choose to work with is CLIA-certified (Clinical Laboratory Improvement Amendments). This means they have to meet high standards to obtain both state and federal certifications and submit themselves to regular inspections.

That’s not enough to reassure me. I’d like to know their false negative and false positive rates. Remember that Theranos had a 35% false negative rate on their syphilis tests.

If you test positive, “you’ll have the opportunity to connect with our independent physician network and may receive treatment.” May receive treatment? Wouldn’t it be better to consult your own physician who can not only order appropriate tests and interpret them but can treat you?

For $199 they will test blood and urine for arsenic, mercury, cadmium, bromine, selenium and iodine. One woman’s testimonial says they found only a high cadmium level. She is worried and wants more information. I easily found some more information. Cadmium toxicity is seen mainly with high occupational exposure. A population study found that “Environmental cadmium exposure was associated with a [slightly] increased risk of all-cause, cancer, and cardiovascular disease mortality among men, but not among women” (which makes me question the validity of the results). Higher cadmium levels are associated with a modest increase in the risk of developing diabetes. There is cadmium in cigarettes; cigarette smokers have higher levels of cadmium. There is no treatment other than avoidance of exposure. Cadmium testing is not recommended as a screening test; since the prevalence of cadmium toxicity is so low, the false positives would far outnumber the true positives and would only cause unnecessary worry.

For $69, they will test your breast milk for DHA to “ensure that you have adequate DHA in your diet to supply your growing baby with the DHA that he or she needs”. Breastfeeding mothers should eat a healthy diet, but there is no need for this test, and no evidence that testing does any good.

For $249, this tests fluctuations of “three vital hormones needed for a restful night’s sleep”: cortisol, cortisone, melatonin, and creatinine. Note: creatinine is not a hormone but is included as a control to make sure the other test results are accurate. Again, there is no need for these tests, and no evidence that testing does any good.

They say they conduct original research, but the page listing “our studies” is a laughingstock. They list a grand total of three studies, all of them presentations or planned presentations at conferences, none of them controlled studies, none published in a peer-reviewed journal. They all amounted to simply collecting data from their customers:

Conclusion: designed for profit, not for health benefits

EverlyWell’s tests don’t make sense. Most of them are not medically indicated, and in the few cases where a test might be indicated, patients would be better off consulting their physician. Some of the tests, like IgG for food sensitivities, are known to be useless and are contraindicated. Others are questionable and not supported by evidence. The scientific community has carefully evaluated the evidence and listed recommendations for screening tests, and EverlyWell’s tests don’t qualify as rational screening tests. They may find a few true positives but are far more likely to find false positives.

I can foresee the fallout. Customers will be unnecessarily worried. They will wonder why their doctors didn’t do those tests. They will take the EverlyWell results to their doctors and the doctors will be left to pick up the pieces, to reassure them, to convince them that they don’t have a disease and that the test results don’t mean anything for their health. People will commit themselves unnecessarily to a restrictive lifelong diet that eliminates many of their favorite foods. Some good might come of it if customers are frightened into adopting a healthier lifestyle, but on the whole, I think these tests are likely to do far more harm than good.

This is marketing, not science. It benefits the company, not the customers. Caveat emptor.