Do dietary supplements affect the survival of cancer patients? 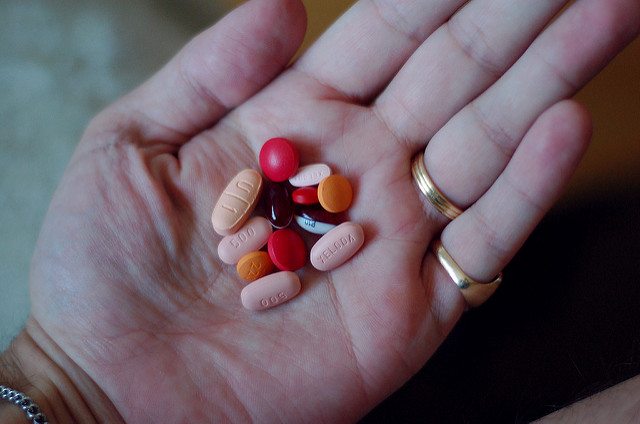 If you’re a regular reader of this blog, you’ve probably observed that we as a group of contributors tend to be pretty critical of dietary supplements. These concerns include:

For the past several years there has been increasing concern that dietary supplements may not simply be useless, but that taking supplements could actually be harmful. This question is especially pertinent for those undergoing treatment for cancer. Cancer treatment can be debilitating and maintaining good dietary health can be difficult. Vitamin supplements may be viewed as a prudent way of supporting dietary intake. More generally, supplements are routinely promoted as treatments for cancer, and cancer patients may be drawn to products promoted as offering “natural” effectives. But because the mechanism of some cancer chemotherapies is to generate reactive oxygen species, there is concern that supplements such as anti-oxidants may actually reduce the effectiveness of treatment. And given the quality control standards of dietary supplements is questionable, there could be unpredictable and unanticipated interactions with chemotherapies that could have negative effects. As I have written on this topic before, there is a lot we do not understand about the effects of supplements on cancer survival. Now a new paper examines the effect of dietary supplements on survival in breast cancer patients.

What did the researchers set out to answer?

This was called the Diet, Exercise, Lifestyle and Cancer Prognosis (DELCaP) study, and the findings were published in the Journal of Clinical Oncology on December 18, 2019. The lead author is Christine Ambrosone, and the study was funded through a number of grants from government and other organizations, with no industry funding (supplement, pharmaceutical, or otherwise). Because of ongoing concerns about the effects of supplements on the effectiveness of cancer chemotherapy, the investigators set out to prospectively evaluate the relationship between the two.

What approach did they take?

This study ran concurrently with a phase 3 clinical trial (S0221) that studied different breast cancer chemotherapy treatment schedules. 80% of participants in that trial agreed to participate in the DELCaP trial, completing a baseline set of questions which asked about regular (at least 1x/week) use of supplements before beginning chemotherapy. A second survey was sent to participants about 6 months later, as chemotherapy was concluding. Among patients alive and without disease recurrent at that six-month point, patients were followed from that point until death from any cause. The median follow-up was 8.1 years.

Patients were then stratified into four categories and analyzed.

What types of patients were enrolled?

A total of 1,340 patients completed questionnaire one and 1,134 completed both questionnaires. Participants were female, in their fifties, and predominantly white. Overall there were 251 recurrences and 181 deaths. Patients who experienced recurrence were more likely to be older, postmenopausal, and to have a higher BMI.

The overall prevalence of supplement use, compared to other literature reports, was low:

What did the researchers find?

What conclusions can we draw from this study?

Dietary supplements appear to be, at best, neutral with respect to cancer survival, and there is no indication that they offer advantages or benefits to those that take them. While this was a small trial with low levels of supplement use, we have the benefit of a concurrent cancer treatment trial that ensured that all patients received standardized chemotherapy regimens. There is a strong suggestion that some dietary supplements may have a negative impact on disease-free survival and overall survival. Notably, the use of any antioxidant was associated with a 41% increase in the hazard of recurrence in this study (albeit, this was statistically non-significant.) However, there were significant negative findings with B12 and iron. The results of this study should provide additional information to cancer patients and their clinicians when discussing the potential risks and benefit of dietary supplements during the course of cancer chemotherapy.