The [California Department of Consumer Affairs’] use of the term “endorsement” is inaccurate, may confuse the public, and may lead the public to falsely conclude that NIH has made certain efficacy and/or safety conclusions regarding acupuncture. Further, consensus conference reports are not a policy statement of NIH or the Federal Government… NIH asks that you correct these two points of information in your booklet and on your website.

I have to praise the Deputy Director of the National Center for Complementary and Alternative Medicine (NCCAM), Jack Killen, for asking the State of California to remove a couple of false claims in a “Consumer’s Guide” on acupuncture.

Indeed, on June 12, 2012, Dr. Killen wrote a letter to the California Department of Consumer Affairs (DCA) expressing concerns about an informational booklet which makes the unfounded claim that the NIH “formally” endorses acupuncture. The booklet also incorrectly states that NIH has “found clear evidence that needle acupuncture is effective” for a list of conditions. Here’s a snapshot of this publication: 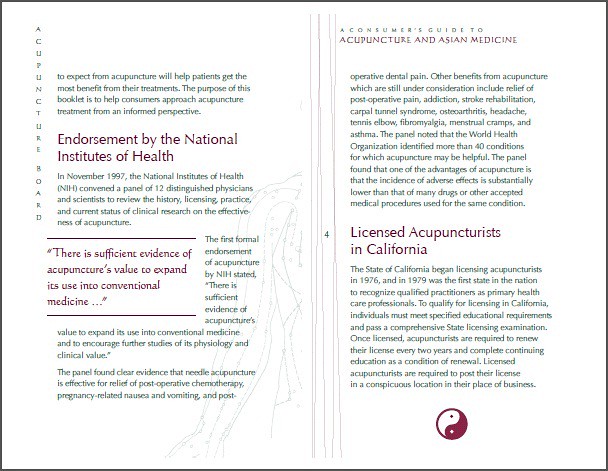 Albeit the long letter, the message is clear and simple: “As a U.S. Federal research agency, NIH does not endorse any product, service, or treatment.” 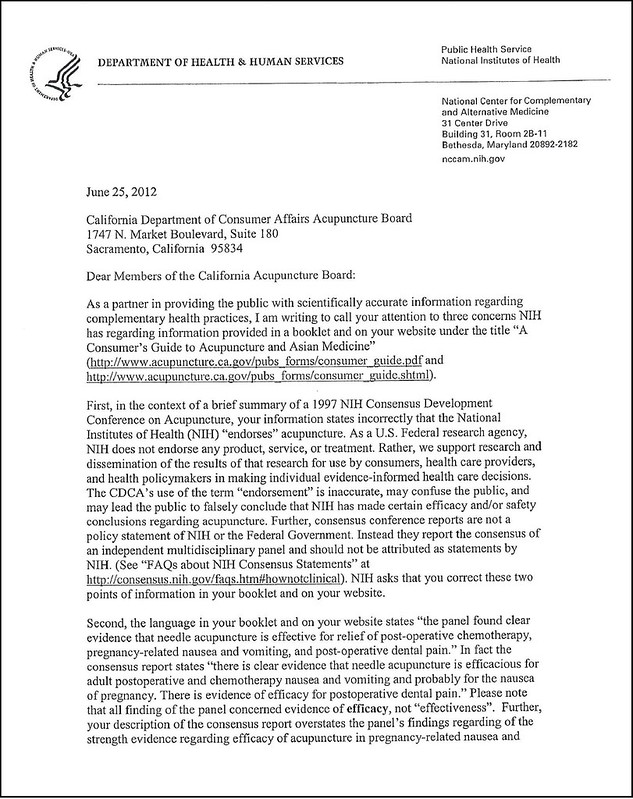 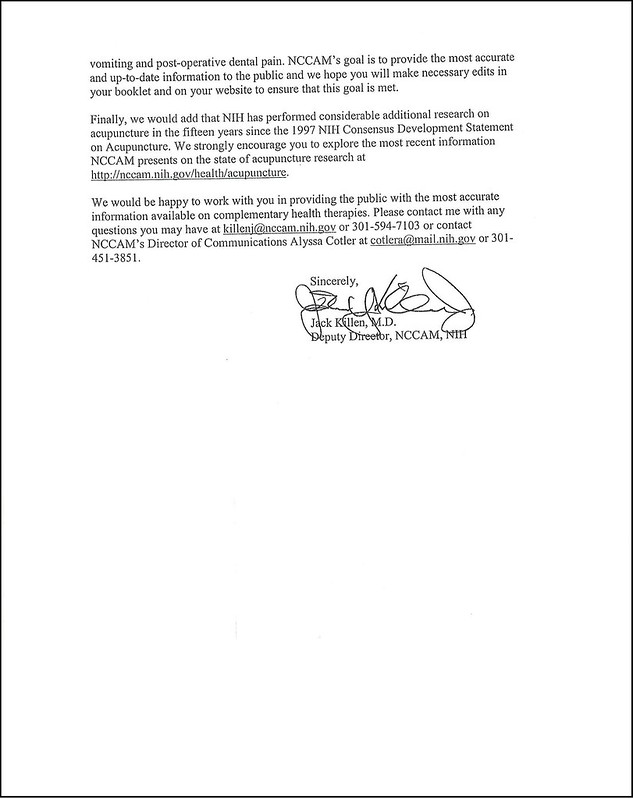 Soon after receiving the letter, the DCA removed the booklet from circulation, deleted the online version from its website, and stopped sending out copies to new licensees.

This official booklet has been published for over a decade. There have been 3 editions since 2002, and all claim that NIH “formally” supports acupuncture and that there is “clear evidence” of its efficacy.

As a result, thousands of unsuspecting patients have since 2002 chosen acupuncture as a treatment.

I first came across the booklet in 2009. Shocked by its preposterous claims, I wrote a letter to NCCAM the same year and asked for clarifications. Their response contained the same essential message found in Killen’s recent letter:

The booklet misstates the purpose of the 1997 consensus panel on acupuncture. As a Federal research agency, the NIH does not endorse any product, service or treatment, nor are NIH consensus documents statements of policy. 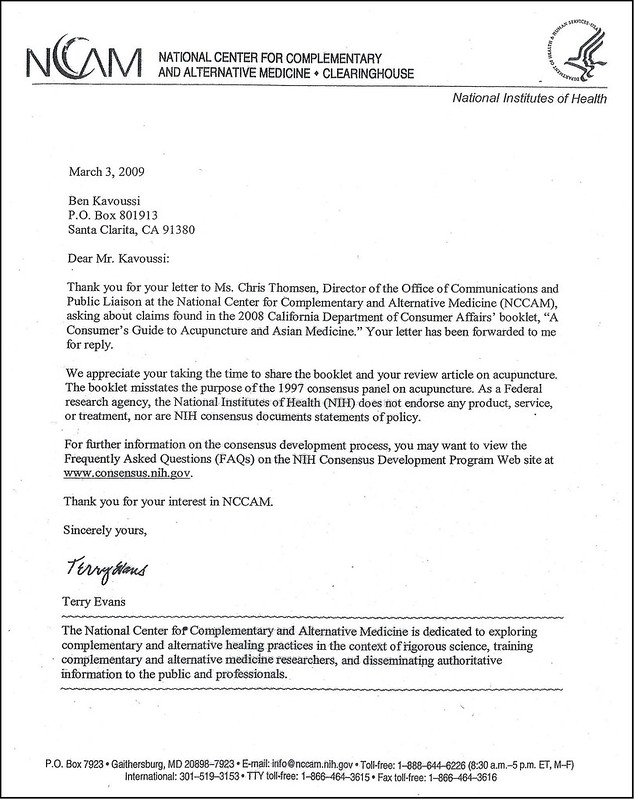 Since 2008, I have sent Terry Evans’ letter to the California DCA and its Acupuncture Board on several occasions. In response, I was told each time that although the NIH does not explicitly state that they “formally endorse” acupuncture, “supporting statements in the 1997 report could be interpreted as an endorsement”!

In other words, according to State of California, the NIH formally endorses acupuncture, even if it the NCCAM – one of the institutes and centers that make up the NIH – explicitly says that it does not!

The latest version of this asinine statement was sent to me in May 2012 by Reichel Everhart, the DCA Deputy Director for Board and Bureau Relations: 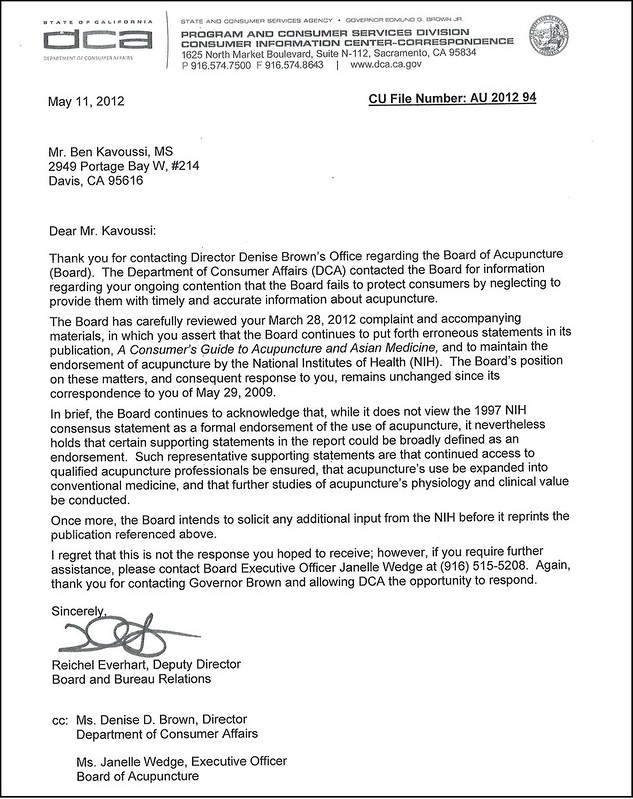 Just 3 months prior to Everhart’s letter, DCA’s Acupuncture Board was put in the hot-seat by the State Senate, mainly for failing to protect the public. The Senate explicitly told the Board that its mission was to regulate the profession, not to promote or to protect it. But so far, the Senate criticism have fallen on deaf ears: a senior member and former Chair of the California Acupuncture Board made this baffling statement in a public meeting just around the same time Everhart wrote to me:

I think given what is in front of this Board, and the work that we are continuing to do to try to create legitimacy around the entire subject and to maintain legitimacy and to promote the profession, we should oppose anything that is so nebulous that should possibly detract from the standardized work that is being done nationally…

— Robert Brewer, former Chair and current member of the California Acupuncture Board, May 17, 2012

Brewer’s statement provides an insight on why it has taken so long to remove the booklet in California: there is an obvious resistance to any evidence that is not in favor of acupuncture or disputes its very purpose. California is not the only state with a protectionist acupuncture board: many regulatory agencies across the US have long operated as lobbies, with the sole intent of legitimizing and promoting the profession. As co-blogger Jann Bellamy recently wrote in a an article about acupuncture practice acts in the US, some even allow the practitioners to act as primary healthcare providers:

Licensing acupuncturists and oriental medicine practitioners and giving them the right to “diagnose,” “prevent” and “cure” disease and to employ other nonsensical “CAM” practices and products is most certainly not in the best interest of the public’s health, safety and welfare.

Fortunately, the Californian Senate seems to be fully aware of the absurdity of regulating acupuncturists as primary care providers. They also know that the Board has a long history of acting as a shield for acupuncture training programs and professional organizations. In March 2012, the Senate Business, Professions and Economic Development Committee made the following comment that supports my argument:

Both the [Little Hoover Commission] and Legislative Counsel did not believe that the law creating the Acupuncture Act intended for an acupuncturist to be the primary care professional responsible for coordinating (or being the “gatekeeper”) for the ultimate care of a patient.

The Senate Committee was referring to the 2004 findings of the Little Hoover Commission, an independent state oversight agency that investigates the government and makes recommendations to promote efficiency and to improve service. The commission’s report (Report #175, September 2004) to the Governor and the Legislature had observed:

After the 2012 sunset review, the Senate gave the Acupuncture Board two years to address a long list of problems and concerns. My hopes are that at the end of this deadline (or even before) the Senate realizes the futility of having a separate board for acupuncture.

Meanwhile, what should be done with the 10,000 or more active licensees in California? Even if they use “a smorgasbord of implausible and unproven diagnostic methods and treatments” — as Jann Bellamy puts it — I do not foresee an immediate end to their licensing, especially during an economic downturn. However, the state also has the obligation to place the protection the public at the highest priority.

In my opinion, the best way out of this quagmire is to disallow acupuncturists to work as primary care providers, and to require prior consulting and screening by a physician, a nurse practitioner or a physician assistant. This is in the best interest of the public, for it leaves the responsibility of coordinating the ultimate care of a patient in the hands of a competent primary care provider.

But at least for now, witchdoctors in California can no longer bluff out that the NIH formally endorses their craft, and that there is clear evidence that it is works for anything!

With many thanks to Daniel Bederian-Gardner, Jann Bellamy and Paul Ingraham for their valuable comments. The opinions expressed here are the author’s.