The Good Rewards of Bad Science

All the world sees us
In grand style wherever we are;
The big and the small
Are infatuated with us:
They run to our remedies
And regard us as gods
And to our prescriptions
Principles and regimens, they submit themselves.

The passage above is part of a burlesque doctoral conferment ceremony, where the French playwright Molière (1622-1673) mocks the unscrupulous physicians of his time. “All the excellency of their art consists in pompous gibberish, in a specious babbling, which gives you words instead of reasons, and promises instead of results,” he writes. In Moliere’s plays doctors never cure anyone; they are put on stage just to display their own vanity and ignorance.2 The Spanish painter Francisco de Goya (1746-1828) also took on the same issue by painting in 1799 a well attired jackass taking the pulse of a dying man, in a pose that accentuates the large gem on his hoof. 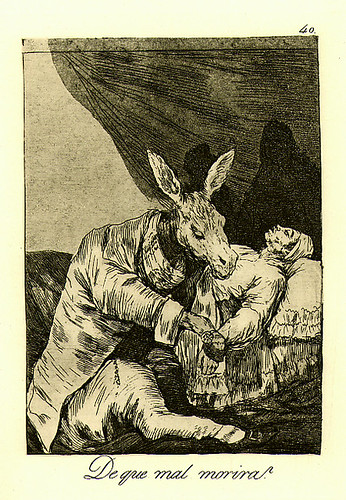 Image 1. De qué mal morirá (Of what illness will he die?) by Francisco de Goya is held at the Biblioteca Nacional, Madrid, and The Metropolitan Museum of Art, New York.

But if the asinine doctors of Molière and de Goya’s time never cured anyone, it is because they held prescientific views, and believed that disease was caused by imbalances in “humors,” and by malefic influences of the Heavens. Even the most educated among them treated illnesses in good faith by purging, bloodletting and enema at astrologically auspicious times. In contrast, current physicians who for the sake of funding embrace and endorse unscientific views and practices under the guise of CAM or integrative medicine, do so knowing that they often contradict the established principles of physics, chemistry, and biology. Therefore, in addition to promoting “snake oil science”3 (as R. Barker Bausell calls it), these physicians are also guilty of bad faith. Most of this takes place at large academic centers, where funding seems to outweigh the concern for science. As Val Jones, MD, writes in 2009′s Top 5 Threats To Science In Medicine:

Often referred to by David Gorski as “Quackademic” Medical Centers – there is a growing trend among these centers to accept endowments for “integrative” approaches to medical care. Because of the economic realities of decreasing healthcare reimbursements – these once proud defenders of science are now accepting money to “study” implausible and often disproven medical treatments because they’re trendy. Scientists at these centers are forced to look the other way while patients (who trust the center’s reputation that took tens of decades to build) are exposed to placebo medicine under the guise of “holistic” healthcare.

Among them, UCSF’s Osher Center for Integrative Medicine has the largest funding, with a cumulative sum of over $28 million. Established in 1997 by the Dean Emeritus of the School of Medicine, Haile T. Debas, MD, and the very generous support of the Bernard Osher Foundation, the UCSF Center collaborates with Harvard University, and the Karolinska Institute in Stockholm.

Some of the “integrative” medicine research involves acupuncture, even if it might end up being a source of scientific embarrassment. Consider, for instance, the dubious research during the 1990s at UC Irvine by the physicist Zang-Hee Cho, who claimed to have in vivo evidence by fMRI for acupuncture’s putative effects. Cho and his colleagues published a series of papers, notably one in the Proceedings of the National Academy of Sciences (PNAS), where they claimed to have observed a correlation between the visual cortex and an acupuncture point on the toe. Based on this unconfirmed observation, they became persuaded that acupuncture involves the activation of the cortical region associated with the targeted organ.4 Cho went as far as claiming that the cortical activation depends on the subject’s personality type, which could be yin or yang! Fortunately, the PNAS article, which is often referenced by acupuncture apologists, was retracted in June 2006 by Cho himself and a number of its coauthors:

Accumulating evidence suggests that the central nervous system is essential for processing these effects, via its modulation of the autonomic nervous system, neuro-immune system, and hormonal regulation. We, therefore, carried out a series of studies questioning whether there really is point specificity in acupuncture, especially vis-à-vis pain and acupuncture analgesic effects as we originally reported in our PNAS article, that had not yet been confirmed by other studies… Having concluded that there is no point specificity, at least for pain and analgesic effects, and that we no longer agree with the results in our PNAS article, the undersigned authors are retracting the article.

Cho has since left the University of California, and is now the Director of the Neuroscience Research Institute at Gachon University of Medicine and Science in Korea. However, his research lead to a $5.7 million gift to UC Irvine in 2000 by Henry and Susan Samueli to research acupuncture, herbal therapy, and the “Indian science of life,” Ayurveda. This funding was used to create the Susan Samueli Center for Integrative Medicine.

UCLA’s “integrative” medicine also involves acupuncture. Although several separate groups and individuals provide acupuncture at UCLA, most of it is now centralized at the Center for East-West Medicine, which was founded in 1993 by its current Director, Ka-Kit Hui, MD. The Center’s website states that in March 2005, the Annenberg Foundation awarded $2 million to UCLA to establish the Wallis Annenberg Endowed Chair in Integrative East-West Medicine. An additional $115,790 grant allowed for the creation of a “healing environment.” Meanwhile, the Center is using UCLA’s international fame to lend legitimacy to Chinese folk medicine. Take a peek at UCLA Today of Jun 17, 2010:

Representing a 5,000-year history of traditional Chinese medicine, Chinese Vice Minister of Health Dr. Wang Guoqiang and a six-person delegation came to campus June 11 to see what they could learn from UCLA, which has long been at the forefront of research in integrative medicine and education in the western world… The Chinese delegation, which had a four-day stay in the U.S., chose UCLA as the only academic medical center to visit to learn how traditional Chinese medicine (TCM) and integrative medicine are practiced as a new health care model… Wang is the highest-ranking official in China overseeing the development of Chinese medicine and integrated medicine. 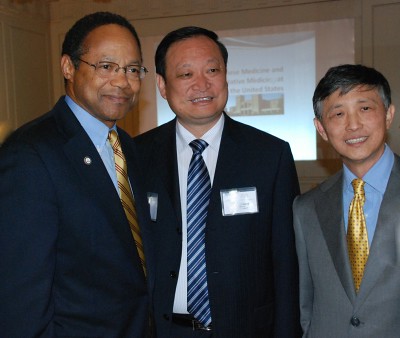 Now read the following grim news about UCLA’s budget, announced just three months before, which might put the arrival of the Chinese delegation in a whole new perspective. UCLA Today wrote on Feb 18, 2010 that:

In planning for next year’s budget, campus leaders believe that UCLA will face a permanent loss of $117 million in state funding for 2010-11, the same as in 2009-10, but with one difference. The $55 million cut that was made on a one-time basis in 2009-10 will become permanent… And although Gov. Arnold Schwarzenegger seeks to restore the one-time $305 million reduction made to UC’s budget this fiscal year — $55 million of which was cut from UCLA’s budget — campus leaders said they are assuming that the State Legislature is going to reject his proposal.

With UCLA experiencing an unprecedented drop in state support, even snake oil science is welcomed, as long as it leads to further funding prospects. After all, as the Roman Emperor Vespasian once said: Pecunia non olet (money does not smell).

In my 2009 post Astrology with Needles, I presented images from European manuals of bloodletting, which clearly indicate that the acclaimed 5,000-year history of traditional Chinese medicine does not include acupuncture as we know it today. What the Chinese practiced is lancing and bloodletting with bodkins and lancets, which significantly resembled what Europeans and Muslims also practiced. This is why the venipuncture points portrayed in European medieval manuscripts significantly overlap with key points described in the Chinese classics. In addition, the evidence presented in my recent post, The Acupuncture and Fasciae Fallacy, shows that the tools described in the Chinese classics resemble fleams and other venipuncture instruments of medieval Europe, and have little resemblance to what is currently considered an acupuncture needle. This is because acupuncture with fine needles is a modern invention; one that was transformed from a side-lined practice of the early 20th-century to an essential and high-profile part of the national health-care system under the Chinese Communist Party.6

Finally, the visit of the Chinese delegation to UCLA reminds me of a 1998 French film called The Dinner Game (Le dîner de cons). In it, Pierre and his Parisian friends organize a dinner party each week, where everyone invites the most ridiculous character he can find, so they can all have a good time mocking him. But when Pierre invites François, who he thinks will steal the show, his clueless guest inadvertently exposes hidden and embarrassing aspects of Pierre’s life. The visitors that have come to UCLA to represent 5,000 years of hocus-pocus, and are eager to learn about an integrative medicine that is mainly a showcase to obtain funding, might have–like François–unknowingly exposed a mockery, and with it, a great charade.