Can A One-Minute Cure Really Heal Virtually All Diseases?

The author of this book claims to have found a one-minute cure that will heal virtually all diseases. The claim is ludicrous, and is not supported by any evidence. 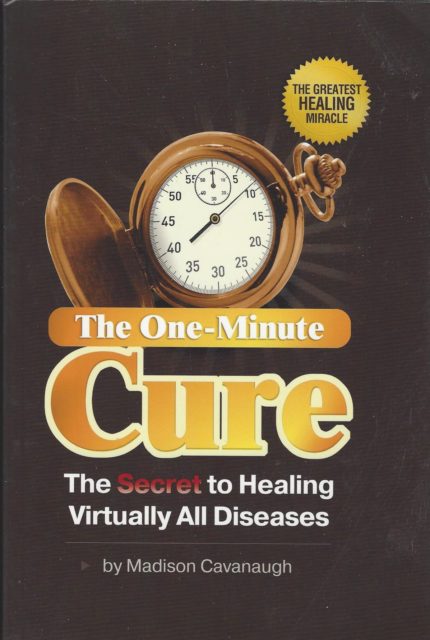 I guess medicine as we know it might as well quit. We don’t need it any more. Madison Cavanaugh has discovered The Secret to Healing Virtually All Diseases and shared the secret in the 2008 book The One-Minute Cure.

And now for something a bit different. Many of you have been reading the Science-Based Medicine blog for long enough to have learned how we go about evaluating health claims. It’s time for a little audience participation in the form of a quiz to test your critical thinking skills.

Read the following paragraph from the description of Cavanaugh’s book and answer these two questions:

The One-Minute Cure reveals a remarkable, scientifically proven natural therapy that creates an environment within the body where disease cannot thrive, thus enabling the body to cure itself of disease. Over 6,100 articles in European scientific literature have attested to the effectiveness of this safe, inexpensive and powerful healing modality, and has been administered by an estimated 15,000 European doctors, naturopaths and homeopaths to more than 10 million patients in the past 70 years to successfully treat practically every known disease — including but not limited to cancer, AIDS, heart disease, diabetes, Alzheimer’s Disease, Parkinson’s Disease. hepatitis, multiple sclerosis, herpes, Rheumatoid Arthritis and asthma.

Answer the questions before you scroll down to compare your impressions to mine and to learn the identity of the powerful healing modality.

How did you do?

This is a self-graded test. You can check how you did.

None of this makes sense

Think about it for a minute. If they had been able to reliably cure patients of almost all diseases for all those years, or even just since the book was published in 2008, can you imagine that we all wouldn’t know about it by now and be using it? No conspiracy is capable of suppressing the evidence of 10 million patients cured of diseases like cancer and Alzheimer’s or of suppressing their bragging rights. Patients and providers would not want to keep it secret; they all have friends and relatives with those diseases; they would want to spread the word and let others be cured. The news should have been all over the headlines. And surely someone would have won a Nobel Prize for such a paradigm-changing scientific discovery. The whole paragraph is laughable.

The rationale is pseudoscientific

The premise is that almost all diseases are anaerobic and cannot exist in the presence of oxygen. This is simply not true. It is a ridiculous extrapolation from a grain of sort-of-truth, the Warburg effect. Warburg studied cancer metabolism and made some useful discoveries; but his idea that oxygen would inhibit the growth of cancer cells proved wrong, and there is no way that ingesting hydrogen peroxide could increase the exposure of cancer cells to oxygen. Arterial blood is already 98% saturated with oxygen; it can’t carry much more, and hydrogen peroxide couldn’t supply more.

Testimonials are easy to find

There are numerous videos online with testimonials from people who have read the book and used its protocols and have noticed amazing results like complete clearing of their psoriasis.

Warnings are easy to find, too

Hydrogen peroxide therapy has been criticized on Quackwatch, Science-Based Medicine, and numerous other websites. There is even a video explaining the science that invalidates the pseudoscientific claims. Hydrogen peroxide is converted to water and oxygen in the stomach and the oxygen is burped out, not absorbed into the body. It does not raise body oxygen levels. The amount (a few drops added to a glass of distilled water) is negligible; adding this amount of 35% hydrogen peroxide to water doesn’t even bring it up to the level of the 3% solution sold as a topical disinfectant.

In 2018 Karen Savage wrote an article explaining how “ Peddlers of ‘FoodGrade’ Hydrogen Peroxide Exploit the Sick and the Desperate“. She reproduced an advertisement claiming benefits for a long list of diseases, including Alzheimer’s, cancer, diabetes, multiple sclerosis, food allergies, and cirrhosis. She quoted an FDA spokesperson:

She went on to say:

The ingestion of hydrogen peroxide… has not been approved by the FDA to cure, treat, prevent, or mitigate any disease, so vendors who market hydrogen peroxide for ingestion — or with claims that it can cure or prevent cancer, AIDS, or other ailments by whatever means — are in violation of FDA regulations and they risk criminal prosecution.

She reported that there are thirty cases a year of hydrogen peroxide poisoning, sometimes resulting in death; and she covered the difficulties of taking any regulatory actions.

The FDA has been working to stop companies selling high strength hydrogen peroxide products from making illegal medical claims. In 2006 they warned consumers

It is interesting (indeed, highly entertaining) to read the many customer reviews on the Amazon website. There are testimonials about improved eyesight, resolution of “minor arthritis,” warming of cold hands and feet, hearing 10% improved, white tongue turned pink, cancers cured (melanoma, brain tumor, lymphoma), more energy, better sleep, wonderful dreams (!?), dialysis down from 3 to 2 times a week, off all medications. One said it cured his skin cancer – before he could get a biopsy to find out if it was cancer! One user had tried a lower concentration and claimed that the preservatives in the 3% product made his kidneys hurt.

Several commenters said it didn’t work, was hard to do, and required a lifelong commitment. Several reported bad side effects. One said:

There was no data to back up the claims, no references cited, and no personal experiences cited. There was no information about the author’s education or experience treating patients.

Several said it was a short book (really just a pamphlet), overpriced, with no information that wasn’t readily available on the Internet for free. One said it was mostly a rant against the pharmaceutical industry. Many advised against buying the book. Some called it a rip-off and a hoax. Several called it dangerous. One pointed out false statements in the book like “in some especially polluted areas [oxygen] is as low as 10%.”

Conclusion: Pull the other one!

When a proposed treatment is untested or inadequately tested, I generally call for controlled studies and promise to follow the evidence. But in this case, I think we already have enough evidence to conclude that it doesn’t work, can’t possibly work, and is likely to cause harm. I think doing controlled studies to test the efficacy of Cavanaugh’s protocol would be a big mistake, a waste of money and a risk to the health of participants. You can call me biased; I am biased in favor of science and reason.

These claims for hydrogen peroxide deserve some kind of “worst ever” award. My immediate reaction was “pull the other one!” I find it hard to comprehend how anyone could believe such arrant nonsense. It’s a sad commentary on the thinking skills of the general public. It shows that common sense is not common. I despair!