The first drug to treat Hutchinson-Gilford Progeria, a rare and uniformly fatal rapid aging disease, has been approved by the FDA. It can prolong the life of these children by 2.5 years, but it is very expensive. 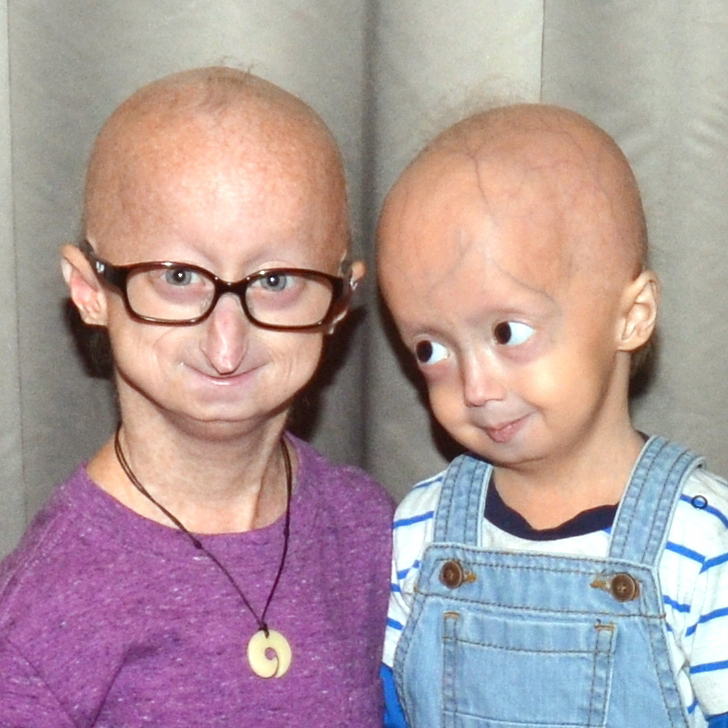 Big Pharma marches on. While vigorously pursuing COVID-19 vaccines that will benefit everyone in the world and should bring them large profits, they haven’t forgotten rare diseases that only affect a few. On November 20, 2020, the FDA announced that it had approved a new drug to treat progeria, a rare genetic disease. The drug is called Zokinvy (lonafarnib). It is manufactured by Eiger BioPharmaceuticals, Inc. It was given Orphan Drug status and a Rare Pediatric Disease Priority Review Voucher. It is indicated to reduce the risk of death due to Hutchinson-Gilford progeria syndrome and for the treatment of certain processing-deficient progeroid laminopathies in patients one year of age and older.

You may never have heard of progeria unless you happen to have seen the HBO documentary Life according to Sam. You can “meet the children” and read their life stories and see their photos here. It is a “rapid aging” disease, where children have the appearance of old people, develop many but not all of the diseases associated with old age (atherosclerosis but not cataracts or osteoarthritis), and die prematurely, usually by age 13 of heart attacks or strokes. The oldest survivor died at age 29. A patient with progeria was presented to us in medical school; her distinctive appearance is seared on my memory and I will never forget her. I didn’t realize until just now what a privilege it was to meet her. They told us it was a rare disease, but they didn’t explain that only a very few people had been diagnosed with it (18 in the entire country today, probably fewer back then).

Hutchinson-Gilford progeria syndrome is rare. The Progeria Research Foundation has been searching for undiagnosed cases. It has identified 179 cases in 53 countries, only 18 of them in the US. Progeria is genetic but not hereditary. It is caused by a sporadic mutation in a gene and it seldom recurs in families.

These children appear normal at birth. By the age of 18-24 months it becomes apparent that something is not right. They do not grow normally, are short in stature, lose all the hair from their scalp and body, and have a small face with a pinched, beaked nose and a shallow, recessed jaw. They have prominent scalp veins and lack body fat. They develop many conditions that usually only appear in the elderly: decreased vision, scleroderma, kidney failure, heart attacks, strokes, heart failure, stiff joints, hip dislocations, and other problems. Their mental and motor development are not affected. They have normal or even above-normal intelligence. Patients with progeria have graduated from college and women with progeria have become pregnant and have delivered normal babies.

It was hoped that studying these patients would lead to a better understanding of the aging process, but that hasn’t panned out. The defect has been identified as a single-letter misspelling (technically a “single nucleotide polymorphism” or SNP) in a gene on chromosome 1 that codes for lamin A, a protein that is a key component of the membrane surrounding the cell’s nucleus. This SNP results in progerin being produced instead of lamin A, but researchers don’t yet understand how that leads to the changes of rapid aging.

The new drug, Zokinvy, is a farnesyltransferase inhibitor that helps prevent the buildup of defective progerin or progerin-like protein. It is dosed by height and weight and comes in two strengths. The capsules are given twice daily. It’s not cheap. A year’s treatment may cost $650,000.

The most common side effects include nausea, vomiting, diarrhea, infections, decreased appetite, and fatigue. A full list of reported side effects can be found here. It is contraindicated if the patient is taking strong or moderate CYP3A inhibitors and inducers, midazolam, or the cholesterol-lowering medications lovastatin, simvastatin, and atorvastatin. Some patients developed lab test abnormalities, and eye toxicity was seen in animals, so periodic lab tests and eye exams are recommended.

The new drug is not a cure, and the evidence is not gold-standard

Approval was based on its demonstrated effectiveness in 62 patients from two single-arm trials that compared it to matched, untreated patients from a separate natural history study. Patients treated with Zokinvy lived an average of 3 months longer than untreated patients through the first 3 years of the study, and an average of 2.5 years longer through the maximum follow-up time of 11 years. This is not the kind of rigorous evidence we usually demand before a drug is approved. It’s small, with a historical comparison group, and is not placebo-controlled or double-blinded. Orphan drugs are allowed to meet less rigorous standards, and in this case there is no other FDA-approved treatment for progeria and the condition is uniformly fatal. Most patients die of cardiovascular disease by the age of 13. So in this case, relying on lesser quality evidence is probably justified.

Conclusion: A welcome but expensive treatment for a rare disease

Children with Hutchinson-Guilford progeria are intelligent, personable, and cherished by their families. I think most families would gladly spend what they could to keep them alive 2.5 years longer. But the cost will be prohibitive for most families, and it’s not yet clear how health insurance companies and government will respond.