NextHow do we avoid harming the elderly with prescription drugs?
AcupunctureBasic ScienceHealth Fraud

Voodoo science is a sort of background noise, annoying but rarely rising to a level that seriously interferes with genuine scientific discourse… The more serious threat is to the public, which is not often in a position to judge which claims are real and which are voodoo. Those who are fortunate enough to have chosen science as a career have an obligation to inform the public about voodoo science.

Imagine you are an ordinary person with limited knowledge of science and medicine, and you see this 2010 video on tai chi and qi gong by the National Center for Complementary and Alternative Medicine (NCCAM) — one of the agencies that make up the National Institutes of Health (NIH). I am certain that the solemn voice of the Director of NCCAM, Dr. Josephine Briggs, talking about “rigorous scientific research” and “accurate, authoritative information on complementary and alternative medicine,” will leave you with a strong sense of confidence in her message.

In addition, despite the fine-print and the disclaimer, the appearance of Dr. Briggs in the video could be broadly viewed as a sign of tacit endorsement. Often, the very fact that a treatment is associated with the government is already a de facto stamp of approval and a warranty of efficacy. For instance, the publication below by the California Department of Consumer Affairs states that the NIH formally “endorses” acupuncture, simply because in 1997, a panel of scientists assessed its use and effectiveness for a variety of conditions. Since 1997 the scientific review of acupuncture by NIH has become synonymous with its endorsement, despite the fact that as a federal research agency, the NIH does not endorse any product, service, or treatment. 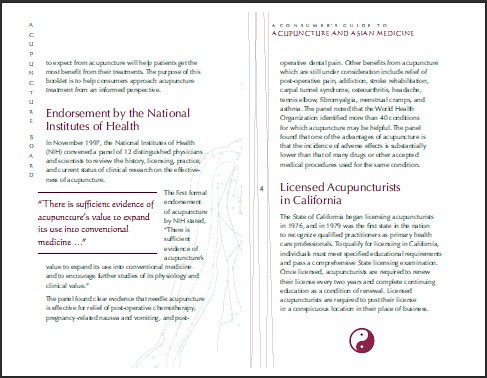 In October 26, 2011, a few weeks after Steve Jobs’ death, Josephine Briggs decided to do something she has never done before: she put an explicit disclaimer on her blog:

When making treatment decisions, unproven “alternative medicine” approaches should not replace conventional medical care approaches known to be useful or helpful. Simply put, the evidence is not there (emphasis added).2

Three paragraphs down the page, she goes on — with a candor rarely seen from her — that given the recent news about Steve Jobs’ choices for cancer treatment, all health decisions “should be guided by the best available evidence.”

If you recall, Jobs put off surgery in favor of juice fasts, cleansing, acupuncture, herbal medicine and other remedies he found online. Job’s biographer, Walter Isaacson, writes that he also followed a doctor who ran an alternative medicine clinic.3 Obviously, Dr. Briggs’ new-found skepticism did not get to him on-time.

Josephine Briggs’ sudden confession actually raises more questions than answers: did she have an enlightenment, an “Aha moment” in October 2011, and she suddenly realized that the evidence was not there? Or perhaps she knew all along, and while her institute was spending over $2 billion of US taxpayers’ money, she conveniently looked the other way? The question is pertinent because — despite the overwhelming criticism from the scientific community — Briggs and her staff have refused to admit that most research in alternative medicine is a reprehensible waste of public funds. If she has willingly looked the other way, then we are dealing here with bad faith and the betrayal of the public’s trust.

And waste and betrayal, there is. Skeptics Eugenie Mielczarek and Brian Engler write in the January/February 2012 issue of the Skeptical Inquirer that since 1992, there have been over 1000 monetary awards by NCCAM to fund hundreds of clinical trials. None of them has revealed anything new that would justify the current annual expenditure of $134 million. Some of these funded studies are beyond absurd: $250,000 was wasted to determine whether waving hands over fatty rabbits will decrease their cholesterol. Did it? Almost ten years later, we still don’t know! Public funds were also wasted to study the efficacy of prayer to cure AIDS or to hasten recovery from breast-reconstruction surgery. Other funded studies involved the use of ancient Indian remedies for type 2 diabetes, magnets for arthritis, carpal tunnel syndrome or migraine headaches, and coffee enemas for pancreatic cancer. It is not surprising that none of these studies showed any efficacy beyond the placebo effect.4

After examining hundreds of grants, dozens of scientific papers, 12 years of documents and advisory council meeting minutes, the Chicago Tribune also reports that NCCAM has spent millions of taxpayer dollars on studies with “questionable grounding in science.” The Tribune cites a grant for $374,000 to find out if inhaling lemon and lavender scents would improve wound healing. NCCAM has also wasted funds in studies of various forms of energy healing, including one based on the ideas of a self-described “healer, clairvoyant and medicine woman” who says her children inspired her to learn to read auras. The cost to the taxpayer was $104,000.5

All that is proven by these studies is that that most alternative “cures” work no better than placebo. It is also the case for acupuncture: a 3-arm randomized clinical trial on chronic back pain with 638 subjects showed that both acupuncture and sham control were better than usual care in managing low-back pain. However, the acupuncture regimen was not found to be more effective than a sham procedure that did not penetrate the skin. In other words, there is no difference between any type of acupuncture, and a placebo control procedure that does not involve real needles. This study was published in 2009 in the Archives of Internal Medicine.6

This adds to the growing body of evidence that there is something meaningful taking place during acupuncture treatments outside of actual needling.

But now that acupuncture, herbal remedies and a vegan diet did not help an American icon, Josephine Briggs is having an Aha moment, and is suddenly realizing that the evidence is not there! Why didn’t she admit to it earlier? Why did her agency omit credible evidence against the efficacy of these remedies for over a decade? Is her forced admission — or rather confession — some kind of proactive measure? These questions remain unanswered. But what is now certain, is the fact that NCCAM’s claim of being “dedicated to exploring complementary and alternative healing in the context of rigorous science,” is in flagrant conflict with its actual practices-on-the-ground.

Besides, let’s also not forget that this conflict is first and foremost politically motivated.7 It is the work of “alternative-medicine purveyors” and their powerful allies who seek to legitimize their anti-science agenda through a federal agency, and to maintain government funding for the promotion of “willful ignorance.”

Willful ignorance is certainly the hallmark of some of NCCAM’s Advisory Board members. Take a good look at their credentials and you will notice one element universally lacking: rigorous scientific training. Even worse, some have been entirely dishonest about their credentials or have a record of disregard for science- and evidence-based medicine, altogether.

Since 2009, Kimball Atwood, has written several posts on this site about the former member of NCCAM’s Advisory Council, the “AltMed Superstar,” Ted J Kaptchuk. According to Atwood’s investigation and also documents obtained from the California Acupuncture Board, Kaptchuk not only does not have real academic training, but he also has grossly misrepresented his credentials. Atwood suggests that Kaptchuk may have violated federal law by lying about his credentials when applying for federal grants.

The revelation that this degree never existed now undermines all of those things, with ramifications that go way beyond Kaptchuk himself. The lie is so fundamental that it casts suspicion on all of his trial reports, for example. That affects all of his co-authors.

Be noted that even real credentials are not necessarily indicative of aptitude for scientific inquiry. Consider another former member of the Advisory Council, Adam Burke, PhD, MPH, MS, LAc. Despite what reads like a string of illustrious credentials, Burke doesn’t have any biomedical training: his graduate degrees are from UC Santa Cruz and UCLA in Social Psychology and Health Education. His healthcare “degree” doesn’t even come from an academic institution: it’s from the American College of Traditional Chinese Medicine in San Francisco (a private vocational school, where he is presently on faculty).

What follows is just crazy talk:

Distant healing — They don’t know how, but some of the people at the Institute of Noetic Sciences, which was founded by an Astronaut up in Marin, they are doing research on distant healing. Their principle investigator is a physicist — they are getting their research published in the best physics journals in the United States.

Burke also boasts the rather awkward honor of serving as Editor-in-Chief of The American Acupuncturist, the official publication of the American Association of Acupuncture and Oriental Medicine (AAAOM). Here below is a photo of AAAOM representatives meeting with Director Josephine Briggs in 2008: 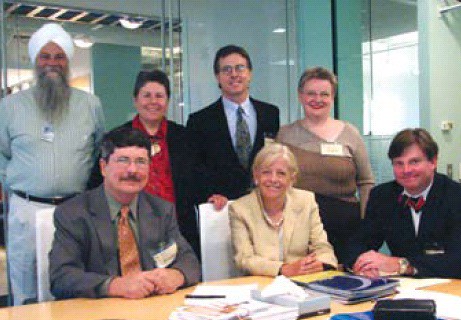 It is certainly not due to their concern for “rigorous science” that the above met with Josephine Briggs. It is because in this New Age of ignorance, hocus-pocus is big business, and getting the government involved can create the false perception of endorsement for any nonsense. This is a common charade that has been played by alternative-medicine purveyors for decades, with the public’s safety at stake.

But no matter — what we see recorded here is a 2008 meeting between an advocacy group and NCCAM. They were assembled to present Briggs a wish-list that included an increase in herbal research; grants to support AAAOM conferences; and the placement of acupuncturists on university research, grant review teams, and research advisory panels. The wish-list also requested “the expansion of the NCCAM Advisory Board to include individuals versed in mixed research methods, including qualitative, population-based research, quality and other approaches.”8

Now fast forward to 2010, about two years after the photo, and AAAOM’s candidate, Adam Burke, is appointed to NCCAM’s Advisory Board. Immediately after, the AltMed wizards from the above picture write in the January 2010 issue of Qi-Unity Report:

We look forward to the in-depth professional and research acumen Dr. Burke will bring to the NCCAM Advisory Council and to the benefits that will accrue to the AOM profession as our medicine transitions into the mainstream of U.S. health care delivery.

“In-depth professional and research acumen” and “our” medicine?! I just cannot refrain from laughing out loud.

But this is no laughing matter. The NCCAM budget for 2011 was $127.7 million.9 They requested a $3.4 million increase in funding for 2012.10 This is over $131.1 million taken away from serious medical research. Fortunately, Adam Burke was not re-nominated in 2012, and cannot influence the channeling of funds for “herbal research” or “grants to support AAAOM conferences” — especially now that we know the evidence is not there.

But despite Dr. Brigg’s disclaimer, many key questions still remain unanswered. How much more money is NCCAM going to waste for studying remedies where something meaningful is taking place outside of the actual treatment? How many more self-proclaimed experts with fabricated or unfit credentials are going to feed off the taxpayer? How many more Steve Jobs need to die before we realize that alternative medicine is in essence foolishness?

In my opinion, none, absolutely none. Once we become aware that the evidence is not there, a transgression takes place; this is when a legal line is finally crossed, and — as Robert Park has argued — foolishness becomes fraud.

With many thanks to Daniel Bederian-Gardner, Kristen Koster, Dawn Martin, Eugenie Mielczarek and Robert Slack for their valuable comments. The opinions expressed here are the author’s.