Four years ago, while watching the 2012 Olympic Games, I noticed a lot of athletes wearing colored strips in various patterns on their body. I discovered that these strips were called kinesiotape, and they were used to enhance performance, reduce injury, and help muscles recover more quickly. I also discovered that these claims for kinesiotape were complete nonsense.

This year at the 2016 Rio Olympics, I (and many other people, judging by my e-mails) noticed that many athletes, especially the swimmers, had what appeared to be circular bruises on their backs, shoulders, and sometimes elsewhere on their body. I immediately recognized the telltale signs of cupping, a pseudoscientific treatment that is part of traditional Chinese medicine (TCM).

What both kinesiotape and cupping have in common, other than a lack of evidence that they work, is that they are immediately visible to the casual observer (another example would be the hologram bracelets that were once common). This led me to suspect that they represent only the tip of the nonsense iceberg at the Olympics. What other worthless treatments are athletes using that don’t leave visible marks on their skin?

Competitive sports are a fertile playground for pseudoscience. Athletes look for anything that will give them the tiniest edge. Even the false belief that one has an edge may lead to a slight benefit from placebo effects. Coaches likely don’t care if a benefit is entirely psychological, all they care about is performance and victory.

This same psychology has also led to superstitions being rampant in sports. I don’t think anyone would propose a serious mechanism by which licking a bat leads to more home runs, but that is not much different from proposing mechanisms for how blatant medical pseudoscience might work.

The vulnerability of athletes to superstitions and placebo effects has resulted in an industry of sports snake oil. The industry targets professional or elite athletes, and then uses them as an endorsement for their products so that the average weekend athlete will buy their product.

This is what is most troubling about Michael Phelps walking around the Olympic pool with circular bruises all over his back. He is a walking advertisement for pseudoscience. 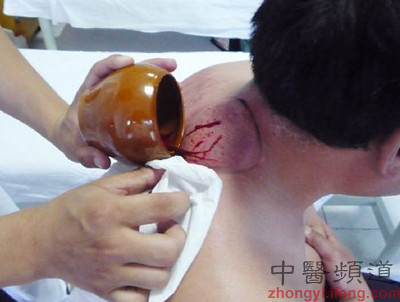 Like many “ancient” alternative treatments, cupping began its life as a completely superstition-based therapy, part of a pre-scientific culture without the slightest clue about the physiological mechanisms of health and disease.

Cupping is a form of bloodletting. Today this is called “wet cupping” to distinguish it from “dry cupping” which does not cause bleeding. The treatment involves placing a glass cup against the skin and then creating a partial vacuum in the cup in order to suck blood to the skin. Traditionally this was achieved by burning incense on top of the cup to heat the air inside.

In wet cupping the practitioner would then lance the skin and let the blood flow. The purpose of this was to remove “stagnant blood, expel heat, treat high fever, loss of consciousness, convulsion, and pain.” Well, that is what some TCM practitioners say today. Back in the day the purpose was to purge “chi”, a word that means blood, or the energy within blood. Cupping was nothing but Chinese bloodletting.

Cupping as a form of bloodletting is still performed today, as wet cupping. In Arabic it is called hijama.

As with many forms of ancient treatments, modern practitioners use the same or similar techniques but simply alter the claims they make for it to sound more acceptable to modern ears.

One manifestation of this is the specific claims for what the treatment treats. The target ailments tend to gravitate toward common subjective symptoms. Low back pain, muscle pain, joint pain, fatigue, and headaches are all common targets. This is a clear sign that the claims made for these treatments are being driven by market forces, not plausibility, evidence, research, or science.

Another manifestation is the alleged mechanisms cited to justify the treatment. These tend to follow the popular narratives of the day, and again are driven by market forces, not science. Centuries ago cupping would release chi. Today it is used to expel unnamed toxins, increase blood flow, or activate the immune system.

There is no compelling reason to believe that cupping does any of these things. These are just the available hand-waving justifications.

We currently live in a world where no medical claim is so absurd that someone will not think it deserves serious research. So yes, there is actual medical research into cupping. I always have mixed feelings about this. Such research is clearly a waste of resources, and is also probably unethical. It also does not affect the practice of proponents. It is nice to have actual research to analyze and point to, but overall it is probably not worth it.

The published studies on cupping are exactly what you would expect them to be (at least if you are a regular reader of SBM or have any familiarity with medical pseudoscience).

Let me start with what I believe to be the definitive review: a review of systematic reviews by Edzard Ernst, which concludes:

In conclusion, this overview of SRs suggests that cupping may be effective for reducing pain. The evidence is insufficient for other indications. All SRs are based on primary studies with a high risk of bias. Therefore, considerable uncertainty remains about the therapeutic value of cupping.

His review, and my reading of the published research, are very consistent with the typical pattern of biased research into a treatment that does not work. We see lots of small and poor quality studies, the kinds that are almost guaranteed to generate false positive results.

The higher quality studies tend to be negative. There may be a residue of positive studies dealing with subjective symptoms, because those are the hardest to control for rigorously. We never see an objective positive outcome.

Further, positive results tend to cluster within highly biased research groups. Ernst points out that most of the positive studies and reviews on cupping come from China. There is good reason to suspect overwhelming bias in such studies, and previous reviews have shown, for example, that 100% of acupuncture studies published in China were positive. Such uniformly positive results are statistically impossible without systematic bias.

Other systematic reviews, including those by favorable researchers published in pro-CAM journals, are similarly unconvincing. For example, a 2013 review of cupping for low back pain included only one randomized controlled trial, which showed:

In the RCT, the effective rate of the wet-cupping group was similar to that of the waiting-list group (p>0.05).

So they included non RCTs, case reports, and editorials, because:

Although RCTs provide a higher quality of evidence, we included non-RCTs in this study because the limited number of RCTs did not provide convincing evidence.

The bottom line of all of this is that research into cupping is mostly negative or of poor quality and with high bias. There is no good compelling evidence for any real physiological effect from cupping.

Apologists might argue that at least the therapy is benign, but not so fast. There is a tendency to assume that a treatment is benign just because no one has bothered to document potential risks.

For example, there is a case report of cupping clearly causing the spread of psoriasis in one patient – the psoriatic lesions occurred in a strange circular pattern, getting the attention of the dermatologists treating the patient.

Granted, side effects are likely to be minor, but without any proven or plausible benefit any side effects are not worth it, including the discomfort, expense, and negative cosmetic effects.

Cupping is no different than acupuncture, bloodletting, phrenology, or any other medical pseudoscience. The treatment is based in pre-scientific superstitions, and has simply been rebranded to more effectively market the treatment to modern customers.

It is unfortunate that elite athletics, including the Olympics, is such a hot bed for pseudoscience. The Olympic Games are supposed to celebrate excellence, hard work, dedication, and friendly competition. Now it also represents gullibility and superstition, and spreads that gullibility to the viewing world.

Note: Orac has covered cupping at the Olympics as well (twice)