Today, April 10, is the first day of World Homeopathy Awareness Week (WHAW), or, as I like to call it, World Sympathetic Magic Awareness Week. This week long “celebration” runs from today until April 16. Now, given the dim view of homeopathy which, I daresay, each and every blogger here at SBM shares, you’d think I wouldn’t want people to pay attention to WHAW. Nothing could be further from the truth. It is because I view homeopathy as nothing more than quackery based on magical thinking that I actually want people to be aware of it, starting with some of the more amusing bits that homeopaths have published over the last year. Like this bit:

Which Steve discussed here, and Orac had some fun with here. (Steve’s deconstruction of Benneth’s nonsense brought responses calling him a hypocrite, a Nazi or a “slave breaker.”)

All of which is why this is the best homeopathy poster ever: 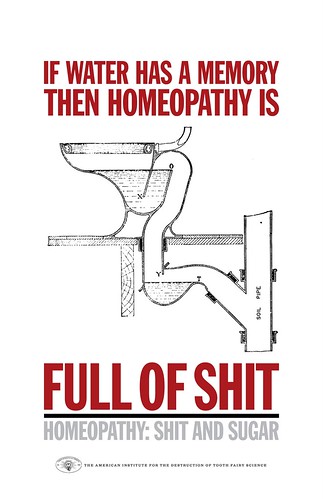 In fact, these two videos probably demonstrate the utter ridiculousness of homeopathy better than almost anything else, which is why I present them again in honor of WHAW. First, there’s the already classic Mitchell and Webb sketch, even though it’s maybe a year old:

Then there’s an oldie but goodie, Homeopathic E.R.:

And let’s not forget that stand up comedy can be perfect for deconstructing nonsense like homeopathy:

David Mitchell and Dara O’Briain even talk about it a bit:

There. I trust I’ve done my part to spread awareness of homeopathy in honor of World Homeopathy Awareness Week. But more can be done. For instance, I suggest you peruse the posts in the homeopathy category of this blog. And, don’t forget, there are still six days to go. Here’s hoping we find some more fun to have with homeopaths before next Friday rolls around, after which Steve, Val, John, Kim, and I will see some of you at NECSS the following day!