Exorcism and Sorcery as Health Benefits?!

Luis Fernando Verissimo, a Brazilian writer, once proposed “voodoopuncture”. Instead of going to the acupuncturist, you would be treated without leaving home. The voodoopuncturist would stick acupuncture needles in the voodoo dolls of you! I add that voodoopuncture could be outsourced to Haiti and/or China. It is a win-win-win situation!

As unbelievable as this might sound, “voodoopuncture” is no fiction at all.

The practice is called “Tong Ren healing,” and involves needling or hammering an acupuncture mannequin, as if it were a voodoo doll. The main Tong Ren “Master” in the US is an acupuncturist in the Boston area by the name of Tom Tam. He treats groups of terminally ill and debilitated patients in a deliverance ceremony that is noting but a revamped Taoist exorcism — only the clay or straw doll is replaced by a plastic mannequin:

Unfortunately, Tom Tam is not the only licensed healthcare provider who is treating patients with hocus pocus and crackpottery. There are over 30,000 other adepts of Traditional Chinese Medicine (TCM) in the US who practice medicine based on notions of health and disease that are rooted in paranormal and magical beliefs. Some of these practitioners take their delusions to the outer limits of absurdity: consider, for instance, “acutonics” and “colorpuncture” as described in these videos:

In anthropology of religion, the principles that underline the above practices are called “imitation” (e.g. using a doll to affect a person), and “correspondence” (e.g. using a sound to affect an object). They are the hallmarks of what is called “sympathetic magic,” meaning the belief that a person, or a thing, can be affected through something that represents it, or that has similar attributes.1 The principle of magical correspondence in TCM is called wu xing (五行) in Chinese, and is known as the Five Phases/Elements Theory in English. It can be summarized as follows:

1. Everything (including our organs) is ruled by one of 5 entities: Water (水), Wood (木), Fire (火), Earth (土), and Metal (金) — which are also the Chinese names for the planets Mercury, Jupiter, Mars, Saturn, and Venus.2 For instance, the heart is ruled by Fire (Mars), the liver by Wood (Jupiter), etc.

2. There is a sympathetic connection (or resonance) between things that are ruled by the same entity (or planet). For example, the heart is connected with the color red, the direction south, the summer season, a bitter taste, and the feeling of joy — because all of these are ruled by Fire (Mars).

3. All 5 entities are interconnected and act on each other. Disease is understood as a result of either the over-, or under-influence of one entity on another. For example, digestive disruptions can be attributed to “Wood overacting on Earth.”3

The concept map (pictogram) of wu xing is often drawn by placing the 5 entities in a circle, and then connecting them according to the lines of influence. The connecting lines create a “pentacle,” or a pentagram within a circle (Image 1). 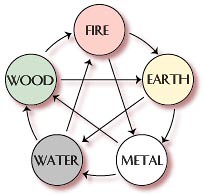 This pictogram, unbeknownst to most TCM practitioners, is nearly identical to a sigil (magical or religious symbol) found in the Old Religion of Northern Europe, also known as “Wicca” (from the Old English word wicca, meaning a male sorcerer). The only difference between the Chinese and the Wiccan pictograms is that Wicca uses Air instead of Wood, and Spirit instead of Metal. The assignment of attributes (color, sound, taste, etc.) to each entity also varies slightly (Image 2). 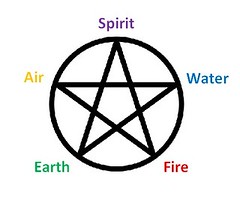 Image 2. The Five Elements of Wicca.

According to the historian Cornelia J. de Vogel, this sigil was commonly used by the druids in the context of spell casting, and protection against evil and malevolence.4 It was likewise used in ancient Greece among Pythagoreans in the context of the cult of Hygieia (Ὑγεία, Salus in Latin), the Greek patron of well-being, sanitation, and the prevention of disease (Image 3). Notably, their brotherhood (an esoteric cult based on numerology) also believed in resonance between numbers, tastes, colors, sounds, and the classical elements.5 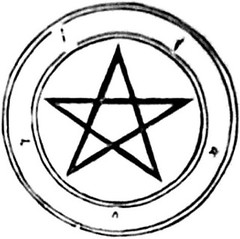 In Christian Europe, some of these pagan beliefs and symbols were culturally assimilated. For instance, the pentacle became the symbol of the five wounds of Jesus Christ.6 But with the advent of science and modernity, magical thinking, its symbolism, and all the rituals that accompanied it were discredited as superstition and ignorance.

Paganism and magic, however, weren’t so easily done away with — and they experienced a renaissance with the American Counterculture of the 1960s. Vietnam-era demonstrations with large hippie contingents famously mixed politics with occultism, magic, and witchcraft. For example, at the mammoth antiwar protest near Washington DC, in October 1967, demonstrators performed a mock-exorcism to levitate the Pentagon and cast out its demons.7

The magical notions of occult resonance and interconnectedness now find their zealots in the growing Neo-pagan and New Age movements. These revamped notions provide the conceptual basis for energy or vibrational medicine, which includes not only colorpuncture and acutonics, but also herbalism, reiki, reflexology, crystal therapy, magnet therapy, aromatherapy, acupuncture, and many other methods to channel putative “energy fields.”

A 2006 publication reported that in 2004, the annual spending on various channeling methods and alternative healthcare in the US was about $10 to $14 billion. It also estimated the number of Americans involved with New Age activities to be around 12 million.8

The popularity of these unscientific ideas and practices in the last decades has had a terrible impact on the public health policy in the US. One consequence is the licensing of non-physician acupuncturists in over 40 states. As George Ulett wrote in 2003, “is a travesty that in this time of scientific evidence-based medicine, acupuncture treatments are given to unsuspecting US patients by some 20,000 acupuncturists, posing as primary care doctors.”9 Be noted that their number has now increased to over 30,000.

Another consequence is the attempt to mainstream TCM and energy medicine by means of lobbying and political pressure. This leads to national and regional healthcare policies that are not based on science and evidence, but on consumerism and financial interest. As Steven Novella writes in Politics and Science at the HHS, this tends to “contaminate” science, and change the rules so that a popular modality can get a free pass. Novella adds that “modalities that require political pressure to force them into our health care system are those that are not backed by good science.”

An example of politically-motivated healthcare policy is the Federal Acupuncture Coverage Act of 2011 (H.R.1328), which is sponsored by House Representatives Maurice Hinchey (D-NY), Judy Chu (D-CA). It intends to “… provide for coverage of qualified acupuncturist services under part B of the Medicare Program, and to amend title 5, United States Code, to provide for coverage of such services under the Federal Employees Health Benefits Program.”

Yet another example is the current pressure put on the US Department of Health and Human Services by Judy Chu (a Representative for a district with a heavy concentration of acupuncturists and apothecaries) to make TCM and acupuncture part of the “Essential Health Benefits.” These benefits are a set of federally-mandated services under the Patient Protection and Affordable Care Act (PPACA).

This comes at a time when California State Senator Leeland Yee is trying to expand the scope of acupuncturists’ practice in his state to include the performance of “Chinese traumatology” — whatever that means.

If Maurice Hinchey, Judy Chu, Leeland Yee, and the TCM syndicate get their way, then revamped exorcism and sorcery will further infest the American healthcare system.

And if they don’t, I can already imagine voodoopuncturists in their cubicals in China, just like Leonardo Monasteri predicted: “…tap, tap, tap, can you feel me now?”