NextChiropractic Practice Building: A Doctor’s Confession and the Report of Findings
AcupuncturePolitics and RegulationPublic Health

English proficiency is not a necessary precursor to becoming a contributing citizen in California’s economy and should not be used by the Board to discriminate against talented and skilled individuals who seek to provide high-quality acupuncture services in California.

To appreciate the recklessness of this statement, and to illustrate the Senators’ disconnect with the reality of Oriental medicine, let’s take a look at a consummate example of services provided by acupuncturists. The following video features the “Master” Kim Nam-soo demonstrating his moxibustion technique. He conducted a similar workshop for future acupuncturists in 2010 at Emperor’s College of Traditional Oriental Medicine in Santa Monica, CA. Make sure you do not miss the part where the Master is skillfully adding his own spit to the treatment!

Kim Nam-Soo (also known as “Gudang”) is a 97-year-old acupuncturist from South Korea. In this video, he is teaching a form of moxibustion (burning of a mugwort cone on or near the skin). He is first preparing a wad of mugwort (Artemisia vulgaris), he is then placing it on an acupuncture point and burning it with an incense stick. Note that he is using his own saliva to make the mugwort more malleable before sticking it to the patient’s skin!

Besides acupuncture and moxibustion, the other services these “talented and skilled” individuals provide consist of massage, cupping, breathing techniques, and the use of herbal, animal and mineral products. In most states, bloodletting is not part of their scope of practice — except for Arkansas.

Forty years after the legalization of the profession in California, one can complete a 4-year vocational degree in acupuncture and Oriental medicine here in the Golden State — all in Chinese or Korean — and then pass a state licensing exam in the same language. The license allows the graduates to lawfully act as a “primary care provider” without having a working knowledge of English! As a result of this aberration in our healthcare laws, hundreds of unscrupulous fortune-seekers come to California each year to learn and practice unscientific mumbo-jumbo without ever learning English. Most of them could not study acupuncture in their native country because healthcare providers are upheld at a much higher standard than here, and acupuncturists are required to know modern biomedical sciences along with traditional modalities.

The Acupuncture Board of the Department of Consumer Affairs (DCA) was recently working to address this issue by limiting the California Acupuncture Licensure Examination (CALE) to English-only. On March 20, 2013, the CA Acupuncture Board organized a town hall meeting in San Francisco to present the reasons behind the necessity of an English-only licensing exam and then ask for public comments (click on the following image to read the report obtained under the California Public Records Act). 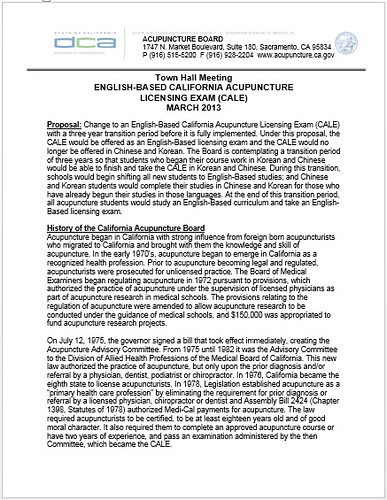 Yet, the initiative came to an abrupt end by a cease-and-desist letter from State Senators Curren D. Price Jr., Chair of the Senate Business, Professions and Economic Development Committee, and Senate President pro Tem Darrell Steinberg. The Senators have asked the Acupuncture Board to immediately abandon its attempts to institute an English-only exam. They are claiming that asking for language proficiency from a healthcare provider is “discrimination!” 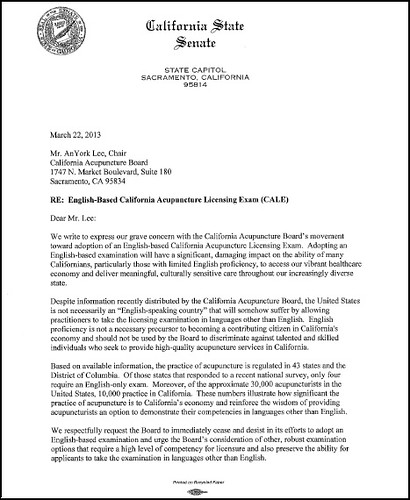 Ironically, the cease-and-desist letter came from the same Senate committee that harshly criticized the Board in March 2012 for promoting the profession instead of protecting the public. Exactly a year later, it is the Senators themselves that have come to promote the profession, and to act in overt disregard for the California Business and Professions Code 4928.1:

Also, this letter is rather curious in that it does not seem to be stating an official position of the Senate or the Business, Professions and Economic Development Committee. The letter starts “We write . . .” but it does not say that either the Senate or the Committee took a vote on the issue, nor do the Senators claim to be writing on behalf of either body. It rather seems that the letter reflects the Senators’ personal opinion, even if this request is on the official Senate stationary and the authors use their official title.

What is also strange here, is the fact that the licensing of healthcare providers without English fluency is not a real concern for the Senators. A staff member who wished to remain anonymous even confirmed that the Senators wrote this letter without consulting any conventional healthcare providers, public health officials, or anyone else with knowledge of infectious diseases, pharmacology, or drug-herb interactions.

Senators Price and Steinberg (and their advisers in this matter, LeOndra Clark, and Bill Gage) seem to have allowed the popularity of Oriental medicine in the Golden State to cloud their common sense, leading them to ignore the crucial fact that acupuncture is not without adverse effects because it is an invasive procedure. They are ignoring that many complications can arise from acupuncture and threaten the patient after needling or after the use of supplements. An acupuncturist who does not have enough English proficiency to conduct a thorough patient interview may not be able to ensure that the modalities within his or her scope of practice are not contraindicated or otherwise subject to caution.

It is therefore important to remind the Senators and their advisers, LeOndra Clark and Bill Gage, that although acupuncture does not seem very harmful, a 2012 study by Wheway et al. indicated that the total figure of needling adverse incidents is likely under-reported and underestimated. Some of these incidents are medical emergencies involving organ injury. When needles are pushed in too deeply, they can indeed injure nerves or puncture internal organs – particularly the lungs, which causes pneumothorax.

Additional dangers include bleeding or bruising due to needling, especially in cases where the patient has a bleeding disorder or takes anticoagulants. Electro-acupuncture, which involves applying mild electrical pulses to the needles — something akin to Percutaneous Electrical Nerve Stimulation (PENS) — can interfere with a pacemaker. Acupuncture can also lead to pregnancy complications. This is why an acupuncturist has to be able to effectively communicate with patients and to also make sure that emergency services are available.1

The use of herbal products also requires effective patient-provider communication. Besides the inherent toxicity of some of them, the potential for herb-drug interactions also exists and should always be a real concern. Several of herbal products have been demonstrated to compete with drugs for cellular receptors, and therefore, a mostly unknown and unreported form of “polypharmacy” exists in patients that also take conventional drugs.2

A good example is the commonly used medicinal herb dang gui (Angelica sinensis). Also known as dong quai, tangkuei, or “female ginseng,” Chinese medicine uses dang gui for premenstrual, menopausal, and other gynecological symptoms, as well as for fatigue, anemia, and high blood pressure. Pharmacological properties of this herb have been attributed to constituent coumarins, polysaccharides, fenulate and/or falvonoids.3,4 In a clinical setting, the concurrent use of dang gui and warfarin reportedly potentiates the anticoagulant effects of the latter, and increases the international normalized ratio (INR) – a measure to monitor the impact of anticoagulants. This can cause widespread bruising.5,6 Considering these factors, the use of dang gui with anticoagulants, platelet inhibitors and thrombolytic agents is contraindicated.7,8

Licorice root, known as gan cao in Chinese, is another commonly used example that can cause drug-herb interactions. Licorice which contains compounds that mimic aldosterone can interfere with the renin-angiotensin-aldosterone axis and lead to hypokalaemia.9 Licorice has been demonstrated to decrease the clearance of prednisolone and to increase prednisolone bioavailability. Licorice has also been reported to potentiate the cutaneous vasoconstrictor response of hydrocortisone. In total, more than 100 drugs are known to interact with licorice, including corticosteroids, antihypertensives, diuretics, laxatives, and other potassium-depleting drugs.10

The California Acupuncture Board, whose mandate is to protect the public, has attempted several times to address the lack of proper patient-provider or provider-provider communication. But every time, groups of practitioners, students, school representatives, and trade insiders vehemently object to any change by claiming discrimination, by calling themselves “contributing citizens,” and by receiving support from politicians who know even less about acupuncture and Oriental medicine than they do about healthcare or patient safety. On March 20, 2013, they came in large numbers for a showdown at a town hall meeting in San Francisco, where the Board was presenting the reasons behind the proposal to limit the licensing exam to English only.

Immediately after, State Senators Price Jr. and Steinberg ran to their rescue with a cease-and-desist letter stating that the US is not necessarily an “English-speaking country,” and that “English proficiency is not a necessary precursor to becoming a contributing citizen in California’s economy.” The Senators also add:

We respectfully request the Board to immediately cease and desist in its efforts to adopt an English-based examination and urge the Board’s consideration of other robust examination options that require a high level of competency for licensure and also preserve the ability for applicants to take the examination in languages other than English.

The Board cancelled other town hall meetings it had scheduled and laid the issue to rest.

In many ways this setback speaks to California’s poor healthcare policies, its politicians, and the place of science in its public health arena. Making healthcare policies based on racial and ethnic politics indicates a profound lack of concern for science and evidence in medicine. Also, claiming that effective patient-provider communication and language proficiency are not necessary to provide an invasive procedure such as acupuncture irresponsibly endangers the public by reducing medicine to the rank of politics.

For those of us who put our faith in science and evidence, these non-English speaking “contributing,” “talented and skilled” citizens, are in reality ignorant voodoo-doctors who have become “primary” healthcare providers because of an enormous absurdity in California law. Since the legalization of acupuncture in the Golden State, these individuals have continuously endangered the public, and each time anyone tries to do anything about patient safety, they run to the first medically-illiterate politician they can find, and cry harassment and discrimination.

Unfortunately, now that California lists acupuncture as a benefit that insurers must include in new plans under the Patient Protection and Affordable Care, New Age hocus-pocus has taken a false sense of legitimacy and efficacy simply because it is listed as a mandatory benefit under the new healthcare law. Acupuncture joins tobacco cessation, vision screening and other benefits that insurers must cover for patients under new plans, beginning in 2014. Appallingly, this turns deluded ignorants into much needed providers; and if they do not speak any English, as long as they are contributing to California’s economy, oh well!

As for the crackpot who came to California in 2010 to teach future acupuncturists how to put spit and filth on patients, according to The Korea Times he was suspended in his native country the year before for practicing his craft without a license.11

With many thanks to Harriet Hall, Ui-Won Hwang, Paul Ingram and JooNyun Kim for their valuable assistance or comments. The opinions expressed here are those of the author.

Ben Kavoussi, MS, is in the UC Davis Family Nurse Practitioner and Physician Assistant program. Ben has done extensive research on the origins of acupuncture and its link with bloodletting. He argues that acupuncture is the Chinese equivalent of the astrology-based medicine that was prevalent in Europe until the 18th-century. In his articles, Ben explains how the purported holistic views of health in acupuncture and Chinese Medicine are based on modern misinterpretations of medieval views on health and disease. Ben has also written about the factors that underlie the modern craze for unscientific ideas. He can be reached at ben[email protected]