NextShould you be “Eating Clean”?
AcupuncturePolitics and Regulation

The sun shone down upon that putrescence,
As if to roast it to a turn,
And to give back a hundredfold to great Nature
The elements she had combined…
— Charles Baudelaire, The Carcase1

Trouble for the struggling California Acupuncture Board (Board) is far from being over.

After being taken to task by the California Senate less than a year ago for acting “as a venue for promoting the profession” rather than regulating it, now the Board is being petitioned for reform by license applicants after a major compromise in the California Acupuncture Licensing Examination (CALI). This is the exam that allows the graduates of state-approved training programs to practice acupuncture, herbalism and Asian massage in California. Physicians who use these modalities are regulated by the Medical Board.

Bear in mind that California is the only state in the nation that has its own acupuncture licensing examination. In other states where the profession is regulated, candidates have to take a battery of computer-based tests developed by the National Certification Commission for Acupuncture and Oriental Medicine (NCCAOM). The California test is designed by the Department of Consumer Affairs, and could be taken in English, Chinese or Korean. This means that an individual can get licensed and practice healthcare in California, without understanding a word of English!

The recent test compromise is so significant that the Office of Professional Examination Services (OPES)—an entity within the Department of Consumer Affairs which develops licensing examinations—was called to testify during the November 2012 Board meeting.

Bob Holmgren of OPES told the Board that following a tip, investigators discovered that test preparation seminars in the Los Angeles area were selling study guides that contained actual questions from former exams. How did this happen? Holmgren believes that a number of test takers have been memorizing questions, so that seminar organizers can reconstruct the whole examination—something that is in clear violation of Section 123 of Business and Professions Code. Holmgren called the level of accuracy of these study guides “shocking,” and added that the questions went back for years. 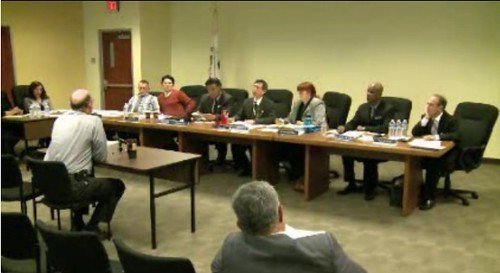 Bob Holmgren of OPES testified in Sacramento during the November 2012 Board meeting. The room was filled with students, school representatives and trade representatives.

Based on this finding, OPES disregarded the answers to the compromised questions in the August 2012 examination. As a result, there was a 30% drop in the passing rate of an exam that already had a low passing rate. A total of 439 candidates took the exam: 270 (61.5%) failed; 169 (38.49%) passed. A pass/ fail history of the exam shows these percentages to be at a record low.

It is not the first time that the State is dealing with cheating and corruption in its acupuncture licensing system. Back in 1980s, the chairman of the former acupuncture regulating agency (the Acupuncture Committee), Chae Woo Lew, was caught selling test questions for $10,000 to $20,000. Lew was sentenced to five years in prison. According to the Los Angeles County district attorney’s office, there may be over 100 acupuncturists involved in the licensing payoff scheme. Only a fraction of all the unqualified practitioners who may have become licensed with Lew’s alleged assistance were caught and prosecuted (Los Angeles Times, March 04, 1989).

Cheating and criminal behavior was a particular area of concern for the “Little Hoover Commission” (an independent oversight agency that investigates State government operations to improve efficiency, economy and service) in 2004. The Commission recommended that to prevent fraud, the responsibility of creating and administrating the licensing exam should be placed in the hands of an outside agency, preferably a national organization, such as NCCAOM.

The Hoover Commission’s policy recommendations and legislative proposals about acupuncture met stiff political opposition from the Board and professional organizations, and were never implemented.

However, on March 12, 2012, during the Sunset Review hearing, the California Senate Committee on Business, Professions and Economic Development brought up the Little Hoover Commission’s findings and expressed serious concerns about the ongoing administrative, educational, licensing and consumer protection issues that the Board has not been able to resolve for over a decade.

Added to this discontent and disconnect, is the political (and possibly legal) action by aggrieved license applicants who failed the last exam because of the removal of the comprised questions. A group of them operating under the name of CALE United Test Front (CTUF) has called upon the Board and the Dept. of Consumer Affairs to justify its recent 30% drop in the passing rate. They have also requested the institution of an exam that is “created, and administered utilizing professional methods, standards and industry input specifically from educators and acupuncturists to avoid less disconnect from exam content and what is being actually taught in the schools.”

Another group of applicants has hired an attorney who recently sent a letter to the Board, detailing the group’s concerns, in addition to charges of negligence if the Board does not respond to the test takers’ demands for the re-scoring of the August 2012 exam to a “customary 70% cut score.” He is also asking for greater transparency with respect to all processes associated with the creation, administration, and assessment of the exam.

Their attorney, Robert Sulnick, argues that the Board has a “fiduciary duty to ensure fair examinations,” and added that throughout its history, “independent oversight committees have identified breaches of fiduciary duty, identifying difficulties with the acupuncture examination (i.e. fraud and criminal charges).”

Notice that the referenced breaches of fiduciary duty that were discussed by several oversight committees were towards the people of California. Nowhere this failure to adequately protect the public is more evident than in the content of the licensing exam.

Indeed, since the Business and Professions Code Section 4926 defines the practice of acupuncture as being “subject to regulation and control as a primary health care profession,” the Board is therefore licensing traditional and folk healers so they can work as first-contact health care providers! And the licensing examination is a reflection of this regulatory lunacy.

In its current form, the exam does not assess the level of medical knowledge that provides the future practitioner with the knowledge, skills and abilities necessary to perform “primary health care.” To the contrary, the exam’s primary focus, and what is being taught in schools, is the practice of acupuncture and Asian Medicine, not “primary care,” as it is defined by the Institute of Medicine in Primary Care: America’s Health in a New Era (1996).

This immediately begs the following questions: how can individuals who do not have adequate competencies in the scientific basis of disease and evidence-based medicine, act as primary care providers? Don’t we have here an obvious disconnect between the regulation of acupuncture, and the reality of its teaching, licensing and practice? Isn’t this a legislative blunder that can negatively impact the public’s health and safety?

These are issues that the State oversight entities have actually brought to the Board’s attention in 2001, but have never been addressed–mostly due to political pressure by acupuncture organizations and training programs.

These influential training programs are by and large post-secondary vocational institutions existing as standalone schools. Some of them were actually founded as religious institutions, which exempted them from the usual post-secondary regulations. With student loan money pouring in, little oversight from the State, lax accreditation standards, and an easy pathway for international student visas, an acupuncture school is an easy start-up with big profit potentials. The key has been the sympathetic Board. Any regular attendee will tell you that at most Board meetings, the majority of attendees are school representatives or lobbyists looking after their interests by encouraging the status quo in the content of the exam and the regulation of acupuncture.

Regardless; the next exam is scheduled for February 14, 2013. According to the Board’s attorney, Spencer L. Walker, only after the completion of the cheating investigation and a review and evaluation by an independent expert, the Board will schedule this matter for discussion at a future Board meeting. A timeline for the investigation and discussion has not been set.

Meanwhile, countless Californians will continue to seek “primary care” from providers who do not have adequate training in scientific and evidence-based medicine. A few of these providers might even have obtained their license fraudulently. As for the wronged test-takers, their concerns seem unlikely to be addressed before the February 2013 exam. And it is almost a certainty that none of this convoluted mess will be cleaned up anytime soon, given that the Board has a long history of—as Robert Sulnick puts it–“kicking the can down the road.”

The opinions expressed here are those of the author and do not reflect the positions of the above mentioned individuals, agencies or organizations.