A homeopathic win for consumers 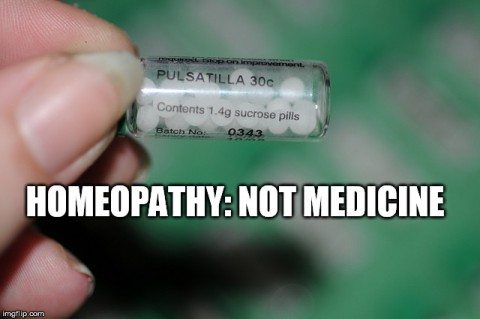 Do you believe in magic? It might surprise you to learn that some people believe sugar pills have healing properties. This belief system, called homeopathy, is a multi-billion dollar industry worldwide, and it’s growing. While there is no convincing evidence to demonstrate that homeopathic treatments are more effective than a placebo, many consumers and even some health professionals accept homeopathy as a legitimate health treatment, and its providers as legitimate health professionals. Responding to the perceived consumer demand for these products, government regulators have had a difficult decision to make: They could ignore homeopathy as a health practice, treating it like we might think of astrology: firmly outside of medicine. Or they could choose some form of regulation, targeting the providers (homeopaths) or the product (homeopathy), possibly with the goal of managing its use, or perhaps limiting harms to consumers. The risk of regulating nonsense, as has been described before, is the perceived legitimacy that recognition and regulation implies. Regrettably, regulation in many countries has had that exact effect. What’s worse, regulation often seems to have prioritized the commercial interests of homeopaths over the public interest, leaving consumers with little understanding that homeopathy lacks scientific credibility as a health practice. Consequently, homeopathy has attracted regular criticism from SBM’s bloggers, science and health journalists, and other science advocates over the years. It appears this advocacy is finally having an effect. Regular readers will recall several posts over the past few weeks, describing the possibility of new regulation of homeopathy by the US Food and Drug Administration (FDA). And just recently, Health Canada announced two important changes to its homeopathy regulation, which may signal a new direction. Are we witnessing the beginning of more sensible regulation of this prescientific practice?

Homeopathy is considered a form of “alternative medicine” but it’s more accurately described as alternative to medicine, given homeopathic remedies don’t normally contain medicine or active ingredients. Homeopathy was invented in the 1800s based on the idea that “like cures like” (which is sympathetic magic, not science). Proponents of homeopathy believe that any substance can be an effective remedy if it’s diluted enough: cancer, boar testicles, crude oil, oxygen, and skim milk are all homeopathic “remedies”. But while they may have different labels, the products are all essentially the same. In the manufacturing process, remedies are diluted in water so dramatically that there’s mathematically almost zero possibility of even a trace of the original ingredient remaining. To homeopaths, this is a good thing, as dilution is claimed to make the “remedy” more potent, not less. These rules contradict core scientific principles as well as what we know about biology and medicine. In short if homeopathy works, the rest of medicine cannot work. And the best evidence shows that they do not work.

Health Canada, Canada’s version of the FDA, has taken the approach of licensing homeopathic remedies (it does not regulate the practice of homeopathy) as part of an overall “natural health products” framework, lumping homeopathy in alongside supplements, vitamins and practices like Traditional Chinese Medicine. Health Canada states that this licensing framework benefits consumers:

Through the Natural Health Products Directorate, Health Canada assures that all Canadians have ready access to a wide range of natural health products that are safe, effective and of high quality.

The consequence, when it comes to homeopathy, has been the regulation of the absurd. There are now hundreds of indistinguishable homeopathic remedies that have been reviewed and approved by Health Canada, based what turns out to be an astonishingly low evidence bar. Health Canada will even allow references to homeopathy textbooks written in the 1800’s as “evidence” of a product’s efficacy. There is no requirement for any randomized controlled trial or any other form of evidence that could actually show efficacy. Health Canada’s bar is so low that when the “homeopathic insect repellent” Mozi-Q was approved, I questioned aloud if there was anything that Health Canada wouldn’t approve. As the television show CBC Marketplace discovered, the answer seems to be no.

A few years ago, Health Canada (and other regulators worldwide) undertook a safety review of cough and cold remedies marketed for children. While these products had a long history of use, there was scant evidence that they did anything beneficial. Given these products had some risks, most regulators concluded that the risks outweighed the benefits. Health Canada ordered that these products could no longer be promoted for use in children, and the products were pulled off pharmacy shelves. The supplement and natural health product industry responded quickly, bringing products to market that took advantage of the special rules created for homeopathy. Soon several homeopathic “cough and cold” products were on pharmacy shelves – not because they had any evidence of efficacy, but actually because they lacked any medicine at all. These were placebos, sitting on pharmacy shelves where the old cough and cold remedies used to sit, labelled as if they could treat coughs and colds.

CBC Marketplace, having previously described how homeopathic remedies lack any medicine at all, decided to test Health Canada’s own licensing process. They applied for approval to market a homeopathic remedy they named “Nighton” to be used to treat fever and pain in infants and children. For evidence, they submitted a few pages photocopied from an old homeopathy textbook. No trials were conducted and no safety data was provided. Just some forms, a few photocopies and a fee. Perhaps not surprisingly, their product was approved and licensed. Here is the listing, still active, on the Health Canada website. As subsequent focus groups revealed, parents do assume that Health Canada’s approved products had been thoroughly tested by Health Canada for both safety and efficacy.

Health Canada has now announced that it is strengthening the rules for homeopathic cough and cold products. It will no longer allow specific health claims for homeopathic cough, cold and flu products for children 12 and under, unless those claims are supported by scientific evidence. That’s a significant change from accepting photocopies from textbooks written in the 1800s. One wonders why this rule isn’t being applied to all homeopathic remedies that are marketed. It’s especially curious given a remarkable statement Health Canada published on its website when the new requirements were announced:

Health Canada regulates homeopathic products as a type of natural health product. Health Canada reviews homeopathic products to make sure that they are safe and that the health claims (what the product claims to do) are supported by textbooks and other references used in the practice of homeopathy (e.g., pharmacopoeia, Materia medica). These products are not supported by scientific evidence.

In putting new limitations on claims made by manufacturers, Health Canada is finally acknowledging what scientifically is known as fact.

Nosodes are not vaccines

The second change recently announced by Health Canada relates to homeopathic “nosodes”. In late 2014, CBC Marketplace used hidden cameras to record reporters asking homeopaths about vaccines. The show sent young mothers (with their babies) to speak with homeopaths about immunizations and vaccines in Toronto and Vancouver. They found homeopaths were giving advice that often contradicted scientific evidence. Rather than endorsing vaccines, some homeopaths promoted “nosodes” which they believe offer vaccine-like immunity from products that are, like all homeopathy, inert sugar pills. A “nosode” is a remedy that starts with infectious material, like polio, measles or smallpox, and then it’s diluted sequentially until mathematically, there’s nothing left but water. Unbelievably, Health Canada has approved hundreds of homeopathic “nosodes” for sale over the years. Two years ago advocacy group Bad Science Watch launched a public campaign against nosodes, and succeeded in getting Health Canada’s agreement to force commercial manufacturers to place a label on their products stating “This product is not intended to be an alternative to vaccination.” Many felt this didn’t go far enough. This year, the Canadian Paediatric Society issued a strong statement on nosodes:

Nosodes are approved for human use in Canada under Health Canada’s Natural Health Products Regulations. At the time of writing, there were 179 distinct products approved for sale, including 82 with labels stating that they can be used to prevent common and important infections. However, as stated previously, there is no scientific or medical evidence that nosodes are effective in preventing infectious disease.

It is important that Canadian parents are provided with the best available evidence to make informed decisions about their children’s health. Current regulations stipulate that labelling on nosodes must include the following statement: “This product is not intended to be an alternative to vaccination”. The Canadian Paediatric Society (CPS) does not believe this proviso fully captures the fact that nosodes are clearly not a safe or efficacious alternative to vaccination. The CPS recommends that labelling on nosode products should be changed to read: “This product has not been proven to prevent infection. Health Canada advises that your child receive all routine vaccinations even if they take this product”.

In July 2015, Health Canada responded with a new warning for the label, clearly modeled on the CPS recommendation:

This product is neither a vaccine nor an alternative to vaccination. This product has not been proven to prevent infection. Health Canada does not recommend its use in children and advises that your child receive all routine vaccinations.

While this is a welcome change, it won’t help all consumers, particularly the ones that see homeopaths for treatment. Health Canada doesn’t appear to require the warning when the remedy is produced by the homeopaths themselves, but only when the products are commercially prepared. So while the labelling change is an improvement, it’s somewhat of a hollow (homeopathic?) success. It doesn’t appear to apply to homeopaths who make their own products, like the ones Marketplace filmed with hidden cameras. Nor does it remove the license of the 121 products already approved, or commit to removing these medically useless products from the market. But it’s another acknowledgment of the lack of evidence supporting homeopathy, which hopefully will continue to raise questions about the entire licensing system.

Homeopathy still has nothing to offer

The evidence is overwhelming and unequivocal: Homeopathy is a belief system, not medicine, and consequently has nothing to contribute to the practice of medicine. Despite this reality, regulators have struggled to find licensing frameworks that prioritize consumers and public health above those of homeopaths and homeopathic manufacturers. Recent changes in Canada are a modest but hopeful sign for change.

Image based on a photo by Philippa Willitts, used under a CC licence.