Nathanael Johnson has written an interesting book about what “natural” means, and doesn’t mean, drawing upon his own life but more importantly – the scientific literature. 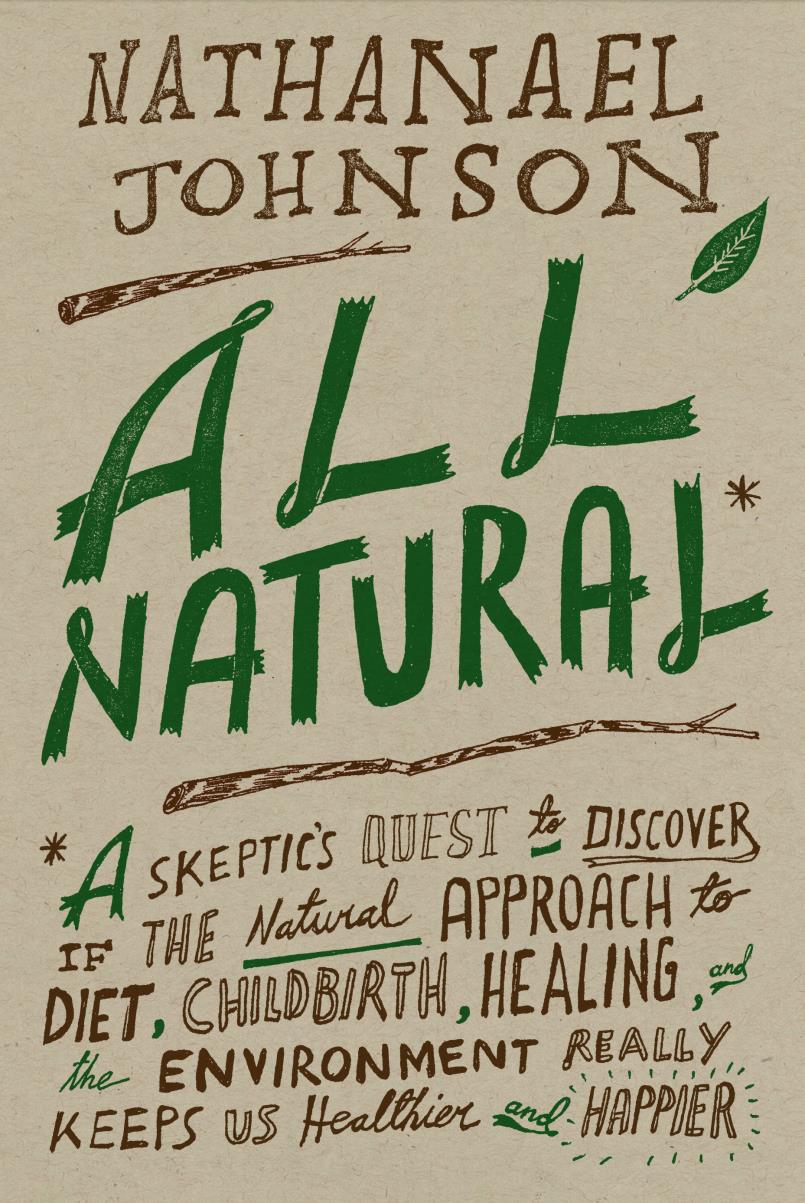 For those who dismiss advocates of the “natural” as ignorant of science and deluded by the logical fallacy that natural = best, Nathanael Johnson’s new book is an eye-opener: All Natural: A Skeptic’s Quest to Discover if the Natural Approach to Diet, Childbirth, Healing, and the Environment Really Keeps Us Healthier and Happier. If nothing else, it is a testament to the ability of the human mind to overcome childhood indoctrination in a belief system, to think independently, and to embrace science and reason.

Nathanael Johnson was brought up by hippie parents who subscribed to every “natural” belief and fad. His mother nearly died of a postpartum hemorrhage when he was born at home (he weighed 11 pounds!). His parents didn’t report his birth, and he didn’t have a birth certificate. He co-slept with his parents, never wore diapers (imagine the clean-up!), was allowed to play in the dirt and chew on the snails he found there, was fed a Paleolithic diet, was never allowed any form of sugar, didn’t know there was such a thing as an Oreo cookie, was home-schooled, and did not know that public nudity was taboo until he and his brother shocked the folks at a church picnic by stripping naked to go swimming in the lake. Nudity was customary in his home, and he was encouraged to “let his balls breathe.”

As he grew up, he started to question some of the dogmas he had learned from his parents. He had been taught that good health resulted from forming connections with nature, but he found that nature “generally wanted to eat me.” Now an adult and a journalist, he understands science and how to do research. He tried to read the scientific literature with an unbiased mindset, asking questions about the subjects in his book’s title rather than looking for evidence to support any prior beliefs, and he arrived at pretty much the same conclusions we science-based medicine folks did. But he still appreciates that a natural approach has value, and he seeks to reconcile nature with technology. He calls his book a comfortable refuge from people who are driven to extremes.

When his wife was pregnant, he interviewed home birth advocate Ina May Gaskin, visited birthing centers, looked up statistics about C-sections and fetal monitoring, and decided what he wanted was “No Nonsense Evidence-Based Midwifery.” He and his wife found exactly that in a hospital where nurse-midwives delivered the babies and high-tech care was immediately available for emergencies. All went well, but throughout his wife’s labor and delivery he worried about whether they had made the right choice. Afterwards, he realized that more worry was in store: no matter how he tried to protect his newborn daughter, she would, in the course of her life, be hurt, would suffer, and would eventually die. A nurse told him “Whenever there’s uncertainty or discomfort, people tend to want to fix it. We have absolutely no tools in this culture for simply accepting, but that’s what you have to do sometimes.” These are wise words that patients might do well to consider before seeking the false certainties offered by alternative medicine.

He decides that eating scientifically is impossible because no diet advice is well-supported by science. Both science-based diets and natural diets go beyond the evidence and produce gurus who claim certainty where there is complexity. They are like two sides of the same coin. He argues for rediscovering the pleasure of food rather than just eating to satisfy hunger or to eat the “right” number of calories of the “right” foods. At the same time, he realizes that telling people to eat what they enjoy would be catastrophic for those with metabolic disorders and laughable for those who can’t afford it.

He describes his brief and disastrous experimentation with a raw food/live food diet. He discovers that when he thought he was avoiding toxins, he was just ingesting different toxins, plant toxins. He says yes, there is probably something out there trying to make us sick or eat our brains, but there is very little certainty about which toxins are harmful to the human body in what doses over a lifetime. It would be a worthy goal for science to identify all toxins and remove them from our diet, but “I can’t wait that long for dinner.”

He investigates vaccines. He offers the insight that when parents ask a pediatrician about vaccine risks, they are looking for advice from someone who has seriously considered the risks and the objections of anti-vaxxers rather than just dismissing them. Simple reassurance that science has decreed vaccines necessary is counterproductive. He counters the argument that we have insufficient proof that vaccines are safe by citing Wendell Berry’s advice that the trick is not to find certainty, but to act thoughtfully with partial knowledge. (That’s the trick of science-based medical practice, too.) He comes to a new understanding of vaccines as a “natural” means of protecting children from disease. He realizes that “unnatural” means things he doesn’t understand. The more he learned about things like vaccines, the more natural they seemed.

He puts a new spin on the old canard that doctors only treat symptoms, not underlying causes. After his appendectomy, he asks the surgeon why it happened to him and why it happened when it did. He gets only a vague answer. “Conventional medicine is concerned with helping pragmatically, using the information available to accomplish what it can…you don’t have to know why a fire started to put it out.”

He talks about placebos, describing Benedetti’s research. He suggests there is a role for metaphor in medicine. His mother tried “Earthing” and felt better, less driven, less scattered, better able to enjoy the moment. She realized it might be a placebo effect, but she felt a sense of connection with the earth. He suggests that she was being “healed by a metaphor.”

He argues for a kinder, gentler practice of medicine. He thinks the Flexner report had the effect of eclipsing the patient. And certainly, part of the appeal of “integrative medicine” is the way it returns the focus back to the “whole” individual patient. In a way, it is “a manifestation of love.” He tells about a doctor who prescribed suicide drugs for terminal patients and found that none of his patients actually used them. Their discomfort was not caused by their disease, but by their loss of control. He wished he had realized that was the underlying problem and had been able to remedy it more effectively. “When healing is reduced to a battle between technology and disease, patients lose both responsibility and control.”

He tells about a pediatrician who spent hours educating his patients about asthma, diabetes and allergies, and measured his success by the fact that for the last 5 years of his career not a single patient from his practice had to go to the ER for complications of those diseases. He voluntarily cut his own paycheck by $50,000 a year by teaching the parents of hemophiliac children to administer clotting factors at home instead of coming to his office each time.

Johnson investigates organic farming, industrial pig farms vs. small family operated pig-friendly farms, and forestry management for multi-use purposes rather than as a single crop. He even investigates raw milk, recognizing the dangers of infection, but also learning that milk from grass-fed, pampered cows has a different microbial flora that might conceivably have a beneficial effect on health by protecting humans from more harmful bacteria. He suggests there may be ways to achieve the economies and successes of mass food and lumber technology with more animal-friendly, tree-friendly, and human-friendly methods. He makes it sound as if it’s definitely worth a try.

We are all isolated beings struggling for survival, but we are also part of a larger whole. The technological perspective builds a protective barrier around us; the natural approach sees us as part of a nurturing whole, invites nature in, and fosters relationships. Nathanael Johnson argues for neither the technological nor the natural perspective, but for reunification. He says:

I can’t do without technology: I’m not willing to give up antibiotics, or movies, or ice cubes, or germ theory, or space exploration. But I’m also dismayed by the way faith in technological progress tends to trade away beauty, and wonder, and joy, and all of those slippery, unquantifiable things that – in the end – make life worth living.

There’s a lot of good science and common sense in this book. It gave me a better understanding of what those “natural” advocates are thinking, and of ways in which modern medical practice could be improved. The only quibble I had with it is that he talks about right brain/left brain differences that are not substantiated by recent evidence.